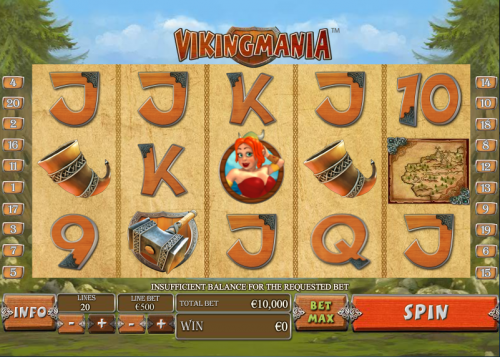 Pillage, plunder and colonise – what’s not to like about Vikings?  These Scandinavian warriors spread themselves around Europe and further afield in the distant past and now Playtech have devised a great online slot machine which combines the ‘cheerful’ characteristics of the Vikings with some entertaining gameplay mechanics.

Viking Mania is a five reel, twenty payline slot machine which leans towards a more cartoonish depiction of the Viking invaders.  Some might even argue that the character graphics owe something to Albert Uderzo’s iconic Asterix and Obelix comics.  The backdrop to the game is a sunny forest scene and there’s a skippable intro movie which is quite charming.  There are plenty of symbols to choose from though and we have the standard 9, 10, J, Q, K and A as the lower value ones.  The higher value symbols are a red bearded Viking, a horn, a wild boar and a well-endowed Viking maiden.  The special symbols are a blonde Viking warrior, a map and a giant hammer.

The wild symbol is the blonde Viking warrior and if you win some free games, he will expand to fill the entire reel.  Unfortunately he does not expand in normal gameplay.  The scatter symbol is the map and landing three or more of these will win you ten free spins with a 3x multiplier.  Not too shabby!

Everybody likes a bonus game and Viking Mania has an entertaining one; you will need to land the hammer on the centre spot of every reel to spell out the word ‘Bonus’.  This can be achieved on separate spins.  When you’ve managed this you will be taken to a screen with the red-headed Viking attached to a board with a big target on (remember the intro?) and offered a choice of items to fling at him.  There’s a tomato, a hammer, an axe, an egg and a chicken.  You now have ten shots and at least seven will hit the target, each one winning you a multiplier for your original bet.  It’s a good way to make some money.

Viking Mania is an entertaining slot with some great graphics and sounds; if we have one gripe it’s the lack of an Autospin feature but that just means you can give your mouse finger some exercise.