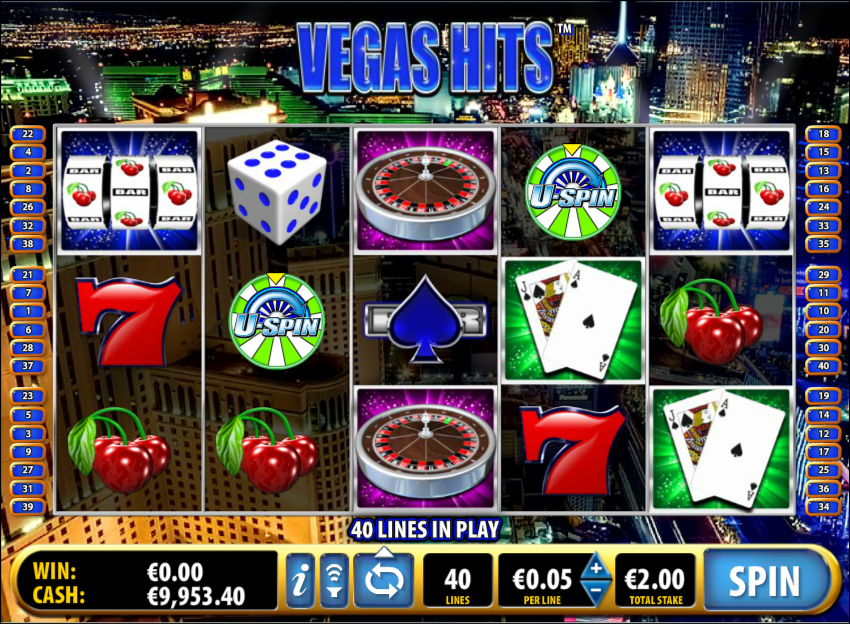 The dazzling lights of Las Vegas apparently make it the only city visible from space and gambling capital of the world is our destination for this glitzy online slot from Bally Technologies. It’s called Vegas Hits and it’s full of bright lights and extra features so keep reading to find out what it’s all about.

Vegas Hits is a five reel slot with three rows and forty fixed paylines; behind those reels there’s a wide view of the lit up strip with searchlights illuminating the night sky.

There are eight main symbols including dice, cherries, blue spades, red sevens, a Blackjack, a roulette wheel, a three reel set and the Vegas Hits logo. The latter four all payout for just two on an active payline.

There’s no wild in the base game but there are special blue and green poker chips plus poker chip multipliers which we shall explain below.

The blue chips appear only on reels two, three and four and if you can land them there you will get to spin a large wheel which will determine the number and style of spins to be awarded. They are as follows:

The green chips appear on reels two, three and four and landing them there will trigger the Money Wheel. Just spin it to award a cash prize based on your stake level.

There are four different coloured poker chips on the reels which award a multiplier of your stake if they land anywhere:

That’s surely one of the most complex free spins rounds we’ve ever seen but it certainly adds some variety and replay value to this game. We’ve enjoyed playing it although the RTP is a slightly disappointing 94.05%.