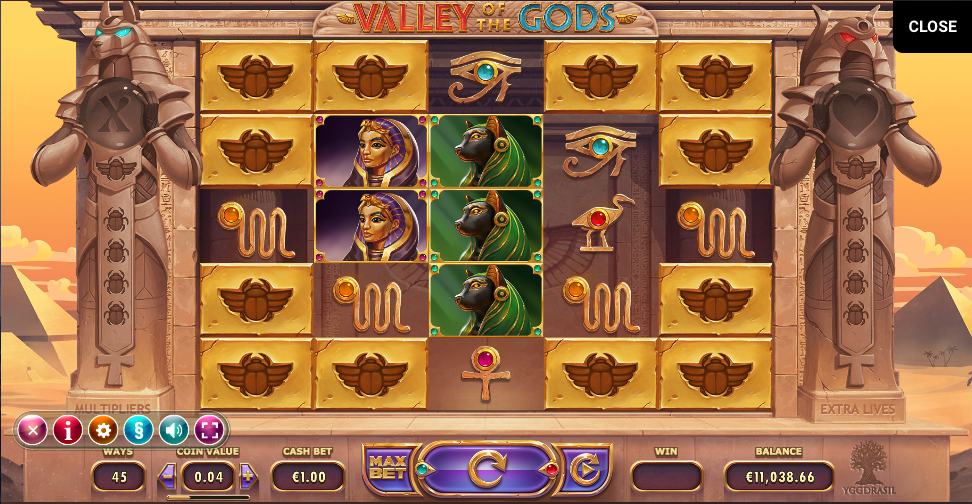 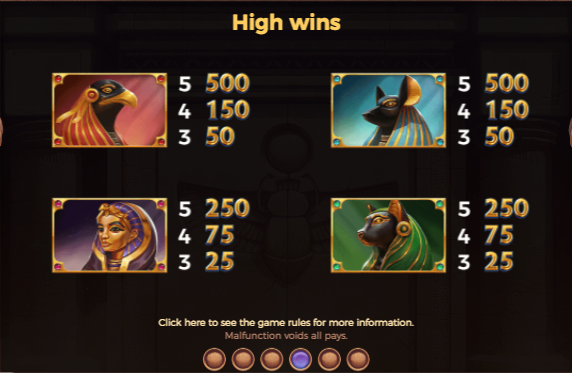 We’ve made the journey to Ancient Egypt a number of times over the years in our quest to play online slot machines but there’s always time for one more trip and this time it’s courtesy of Yggdrasil Gaming and Valley of the Gods, a release with a really interesting gameplay mechanic – find out how it works below.

Valley of the Gods is a five reel slot with five rows and 3125 paylines which means that winning combos can be formed as long as there matching symbols in adjacent reels starting from the left hand side. The reels spin within two statues which have a purpose we shall explain shortly.

The four high value symbols include godly representations which will be familiar to fans of this genre; the lower values are golden shapes inlaid with coloured gems also related to theme such as the Eye of Ra, an Egyptian cat and an Ankh.

There are no wild or bonus symbols in Valley of the Gods but there is a scarab ‘blocker’ icon which we shall explain in a moment.

On your first spin twelve of the scarab blocker symbols will be placed on the reels in outer positions but when you land a winning combo of three or more symbols, that number of blockers will be removed. Each successive win will remove more blockers but a non-winning spin will replace them all.

If you manage to clear all the blockers out of the way, the feature will begin and initially and blue gems on the reels will fly to the statue on the left and fill up the multiplier meter; red gems will fill up the extra life meter on the right.

You’ll begin this feature with one extra life and then the free spins will start; and golden gem symbols in winning combos will add more multiplier or extra life gems to the meters but any non-winning spin will remove one life – when all lives are gone the round is over and the blockers return to their positions.

Valley of the Gods is a very addictive slot in which it always feels as though the feature is just around the corner when in fact it’s fairly tricky to get to that point. It’s pretty lucrative when you do finally make it though and this game comes with an RTP of 96.20%.