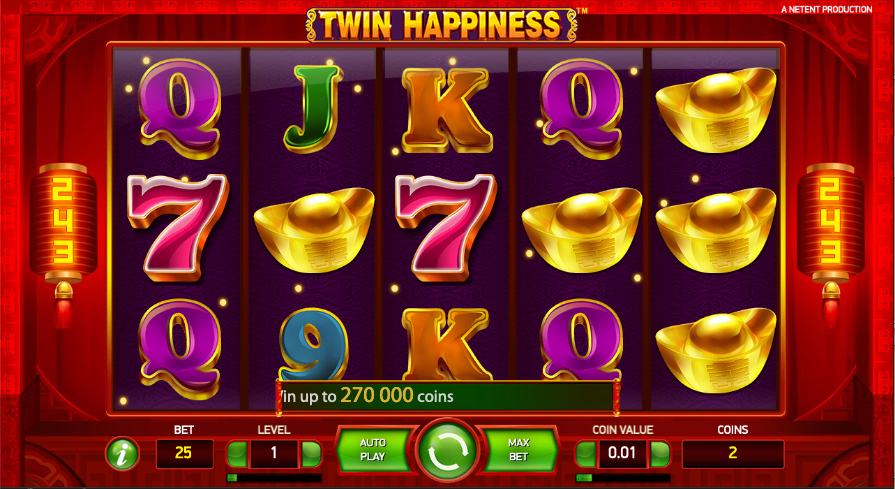 The calming twinkle of Chinese music and the deep red colours on display tell us that here we have an oriental-themed online slot with a clever but familiar gameplay mechanic we’ve definitely seen before; its title is Twin Happiness, it’s developed by Net Entertainment and you can find out how it all works right here.

Twin Happiness is a five reel slot with three rows and tow hundred and forty three ways to win – this means there’s no payline structure in place and wins can be formed as long as there are matching symbols on adjacent reels starting from the left hand side.

Lights fade on and off behind the symbols which spin on a slender frame floating against an ornate, red backdrop and flanked by Chinese paper lanterns on either side.

The Chinese character is wild and it will replace all other symbols to help form winning combinations.

As with Net Ent’s classic Twin Spin slot the gameplay and feature are combined into one because on each spin at least two adjacent reels will lock together with identical symbols. These linked reels can appear anywhere on the reels and things can get better as three, four or even five reels can become locked together, making a big win a certainty in the latter case.

“They’ve rebadged it you fool!” says Alan Partridge in that famous episode and while Twin Happiness is certainly a very nice slot it’s essentially Twin Spin with a Chinese influence so this seems like rather a lazy outing from Net Ent. Still, perhaps you can’t have too much of a good thing so give it a go if it looks like your thing.