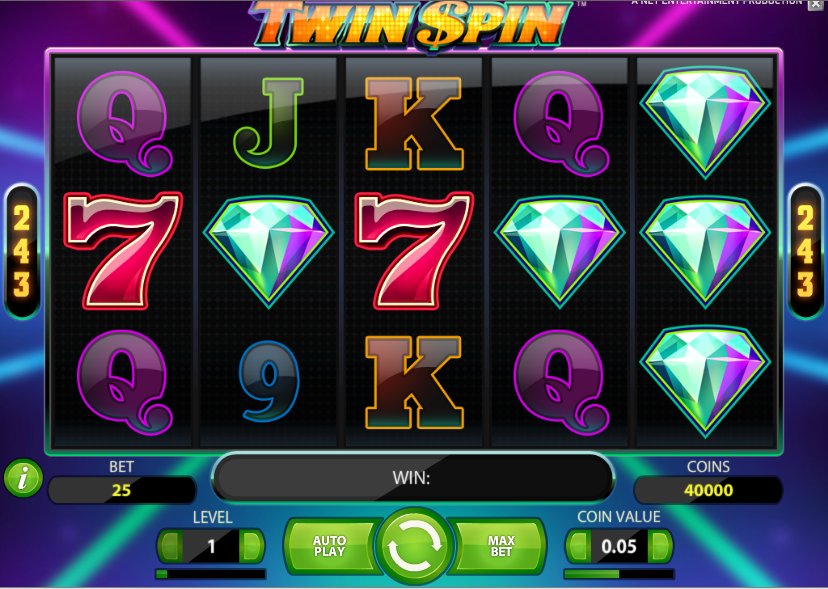 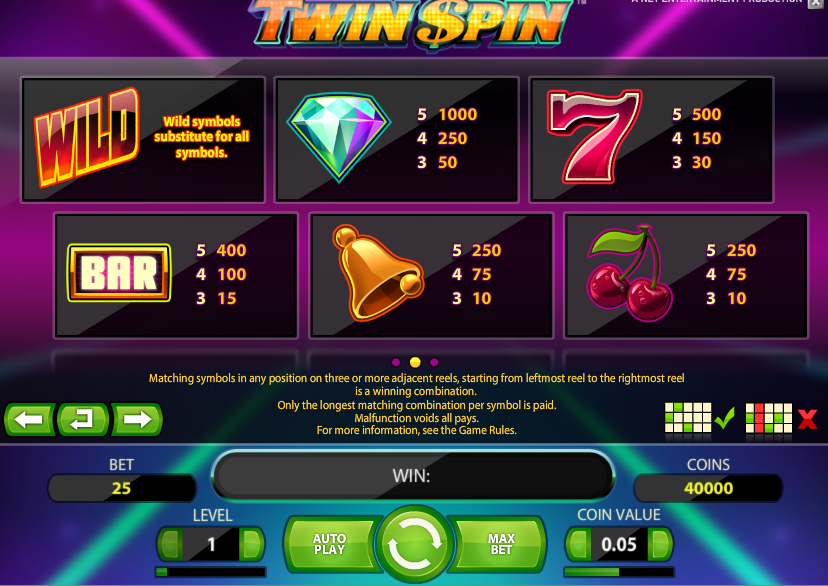 We’ve been waiting a little while to try out Twin Spin, the brand new online slot machine from Net Entertainment; it’s always a pleasure to play a Net Ent game – especially when it’s introducing something genuinely new into the mix and this slot certainly does that.

Twin Spin looks absolutely fantastic and in some ways it’s a throwback to a classic slot in that all the symbols are of the type you might see in a Las Vegas casino.  Apart from the 9, 10, J, Q, K and A there’s a cherry, a bell, a Bar, a red seven, a diamond and then a Wild symbol.  In this game the wild substitutes for all other symbols.

There’s a simplicity to this slot which is especially attractive – the lines are clean, the colourful symbols are nice and big and there’s a groovy soundtrack which keeps things ticking along nicely.  There are five reels and 243 ways to win.

Paylines are dispensed with when 243 paylines are in effect and it becomes possible to win just by landing matching symbols in adjacent reels, starting from the left hand side of course.

This is why we’re here of course and it’s this new feature which has meant we’ve been looking forward to this slot for some time.

It’s pretty simple really, with each spin two of the reels will spin together and will feature identical symbols.  This can be the first two reels, the last two or any in-between although you’ll win more often if it occurs on reels one or two.

As an extra feature, the two reels will sometimes expand into three, four or even five reels and that’s obviously where the big wins are.

We can’t really offer anything useful here – only the bet levels can be changed so there’s not much interactivity.  Keep the funky soundtrack on while you’re playing though.

Twin Spin is an example of how to produce an attractive, compelling game with the minimum of bonus features.  Just set the Autoplay option, sit back and watch the reels spin – it’s great fun.