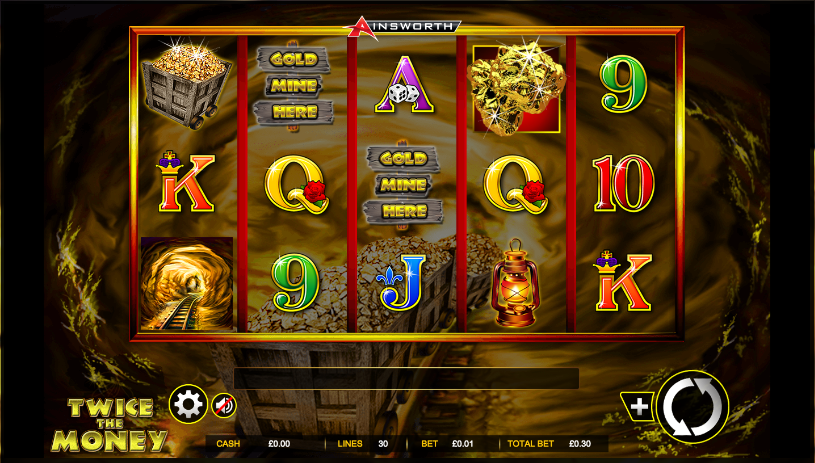 Many are the times we’ve descended deep underground into the gloomy darkness to check out an online slot with mining as it’s theme but we’re always happy to don a hard hat for one more trip below the surface; this time we’re having a look at Twice The Money, a release from Ainsworth Technology with some familiar symbols and a free spins round – read all about it below.

Twice The Money is a five reel slot with three rows and up to thirty paylines; the symbols spin on transparent reels through which we can see a faintly lit tunnel stretching off into the distance; carts full of gold tempt us in the foreground.

There are a number of high value symbols including a pair of scales, a signpost, a cart of gold, an underground tunnel and a gas lamp; 9, 10, J, Q, K and A represent the lower values.

The wild symbol is a lit clump of dynamite which appears on reels three, four and five and will substitute for all others to form winning symbols except for the gold nugget scatter.

This is triggered by landing three or more of the gold nugget scatter symbols anywhere in view for which you will receive ten free spins; during this round a multiplier wild dynamite appears on reel three and will multiply your wins by various amounts depending on which spin is underway:

Landing three or more scattered nuggets during this round will award five more spins – this is the Twice The Money feature. There are no scatters on the reels now and so it’s not possible to trigger any more spins.

Twice The Money is an enjoyable slot with enough variation in the feature to give it some longevity; it’s worth checking out but there are better mining-themed games out there – it comes with an RTP of 94.30%.