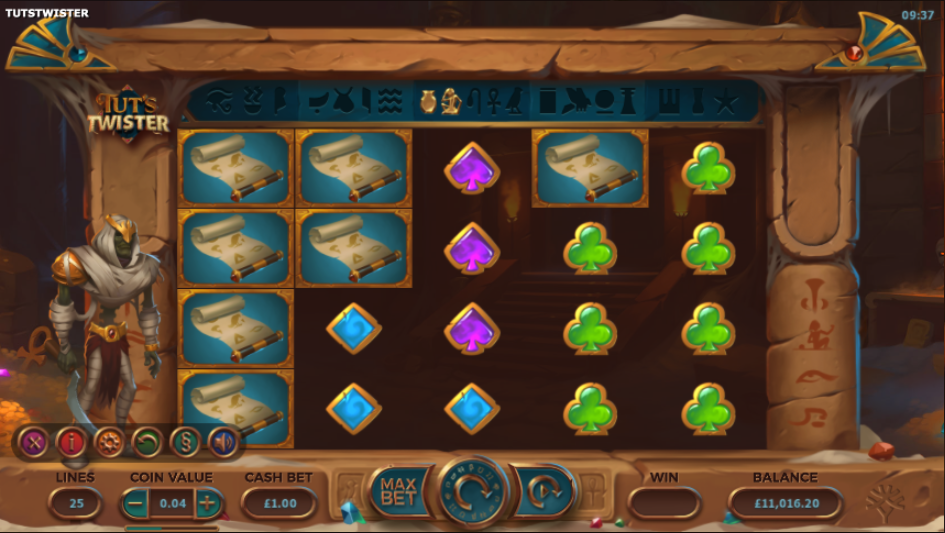 When Howard Carter unearthed the tomb of Tutankhamun in 1922 he also brought to the surface the facts and legends of this pharaoh; what he didn’t know was that more than 100 years later an online slot called Tut’s Twister would be developed in his honour – it’s from Yggdrasil Gaming and you can find out all about it below.

Tut’s Twister is a five reel slot with four rows and twenty five fixed paylines; the sturdy stone entrance to Tut’s tomb frames the reels while the bandaged chap himself stands to the left, waiting for some bonus action to happen. Above each reel is a selection of hieroglyphs and their purpose will become clear shortly.

The higher value symbols include a bowl of jewels and gold, the sign of Anubis, an expensive ring and a scroll covered with hieroglyphs; playing card symbols in red, purple, green and blue make up the lower values.

The wild is a gold ‘Wild’ which will substitute for all others to help form winning combinations – there are no other special symbols.

There are two ways to trigger this feature:

The twister is wild and any other wilds on the reels will be sucked towards it one reel per spin; more wilds landing will extend the feature and each time three wilds have appeared, the multiplier value for any wins increases by 1x. When there are no more wilds you’ll receive one more spin to try and land another – if this is unsuccessful all the wilds hoovered up by the twister will be fired back onto the reels to help you with one final win.

Tut’s Twister is a very nice looking slot with a clever gameplay mechanic and an ingenious bonus feature which triggers regularly; it’s another enjoyable game from Yggdrasil and it comes with a high RTP of 97.10%.