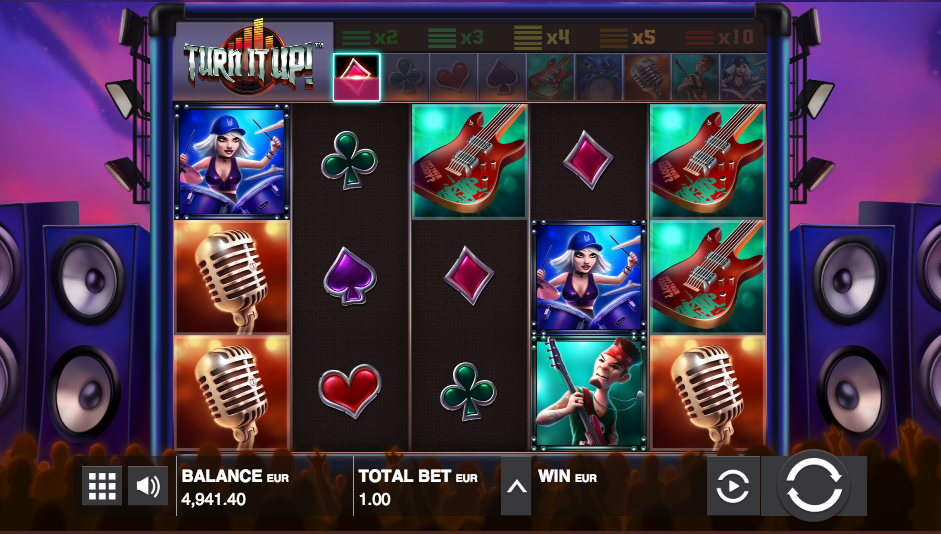 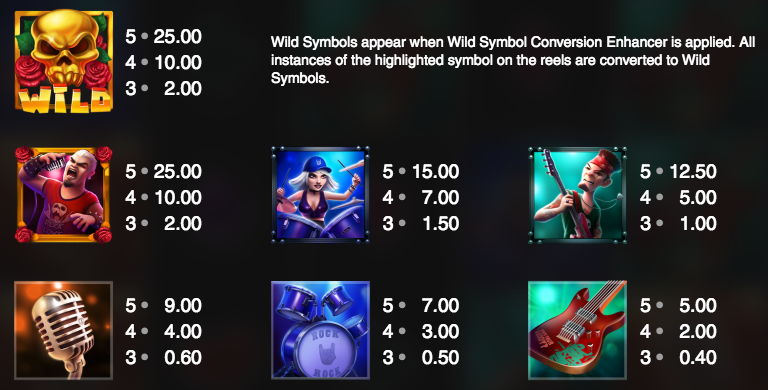 If your ambition as a musician is to crank the volume up to eleven in the manner of Spinal Tap then this online slot from Push Gaming should be right up your street – it’s called Turn It Up! and it comes with some pounding rock music as well as plenty of themed bonus features.

Turn It Up! is a five reel slot with three rows and ten fixed paylines; the bobbing heads of rock fans at the bottom of the screen tell us that those reels are spinning on the stage, surrounded by spotlights and gigantic speakers.

The high value symbols include the three wild-looking band members, a microphone, a drum set and a guitar; coloured playing card symbols represent the lower values.

The golden skull is wild and it will substitute for all others except the devil hand scatter symbol to help form winning combos – it doesn’t appear automatically on the reels but we’ll explain that shortly.

You may have noticed the various symbols and multiplier values shown above the reels and these come in handy as consecutive non-winning spins mount up. A particular symbol or multiplier will be selected at random and its feature will become active after a certain number of losing spins – multiple features can be active at the same time and shown below is what’s on offer:

Once a win is gained all enhancers are reset.

This is triggered by landing three of the devil hand scatter symbols anywhere on reels one, three and five; each losing spin will award one reel enhancer to help out with some bigger wins. When the initial spins have finished you’ll receive the One More Win! bonus in which the reels will spin and enhancers are collected until a win is awarded.

On any winning spin in the base game the Win Spin Bonus may be awarded which will award several reel enhancers.

Turn It Up! is what an online slot should be – it looks and sounds great, it has multiple features both in the base game and triggered separately and those reel enhancers add some excitement to the gameplay, strangely making you want to lose spins in a row. Check it out, it comes with an RTP of 96.51%.