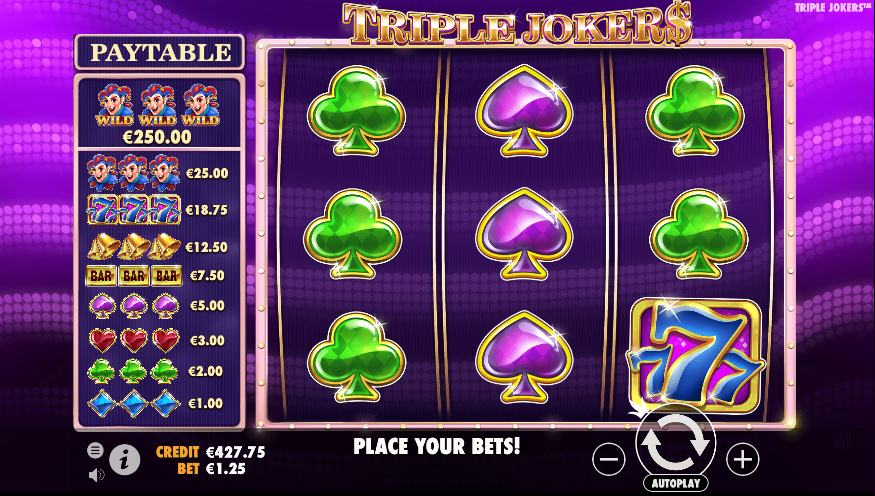 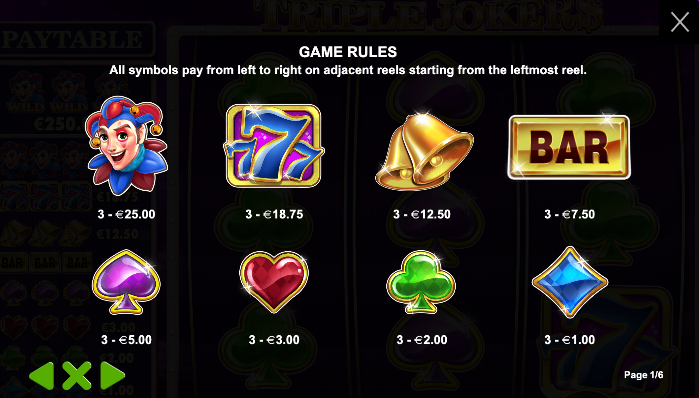 If you’ve previously enjoyed Triple Dragons and Triple Tigers from games developer Pragmatic Play then you’ll be pleased to hear about Triple Jokers, an online slot machine from the same company with the same engaging graphics and smooth gameplay – find out how it all works below.

Triple Jokers is a three reel slot with three rows and just three fixed paylines; twinkling lights are embedded in the frame which holds those reels while the payline is handily situated on the left hand side. A shimmering purple backdrop provides some context behind the reel set.

The symbols are a familiar bunch and include the joker, some blue sevens, golden bells, a gold bar and then some glimmering playing card symbols in purple, red, green and blue.

There’s no bonus symbol in Triple Jokers but there’s a wild which is created as part of the feature and it’s explained below.

If you weren’t expecting any extra features in a three reel slot machine then prepare to be surprised as we explain that the Wild Respin is triggered by landing one or two reels full of stacked joker symbols; the joker now becomes wild and the stack will lock in place while the other reels spin until a win occurs. If a second stack appears and locks in place the remaining reel will spin until a win occurs. It’s possible to fill all reel positions in this manner for a big win.

The gameplay in Triple Jokers is similar to Triple Dragons but there’s nothing wrong with that if this looks like your cup of tea – it’s simple, colourful and high quality and certainly worth a few spins.