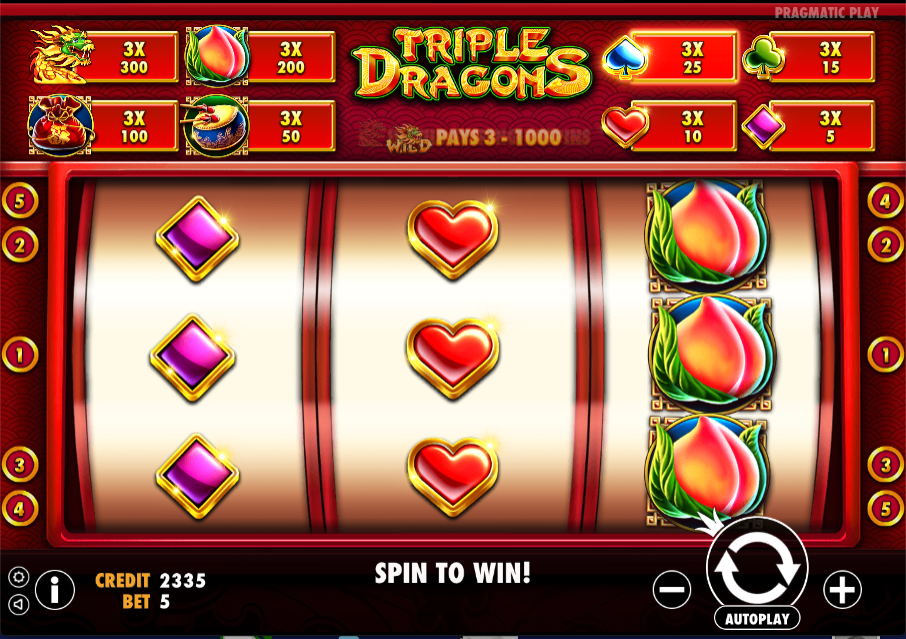 We don’t always need five reels to enjoy some reel-spinning action so we’re pleased to bring you details of this Chinese-themed online slot machine from Pragmatic Play; it’s called Triple Dragons and that’s a title which refers to the clever bonus feature built into the gameplay – read all about it below.

Triple Dragons is a three reel slot with three rows and five fixed paylines; red is the predominant colour here and the design is a close-up of a physical machine above which the paytable values flash in sequence. A typically oriental soundtrack accompanies your gameplay.

The four higher values are all theme-related and include the golden dragon, the lotus flower, the delicately tied bag of gold and the ceremonial drum; glossy playing card symbols in blue, green, red and purple make up the lower values.

The golden dragon is also wild in certain circumstances (explained below) and it will substitute for all others symbols to help form winning combinations.

The golden dragon can appear in stacks on the reels and whenever at least one stack of dragons fills a reel completely the Wild Respin is initiated. All those dragons will be transformed into wild symbols and the other reels will respin until a win is achieved.

During those respins you may be lucky enough to land another full stack of dragons which should make the final win more valuable; the very lucky players may land wilds on all positions for the biggest payout of all.

Triple Dragons is one of the few three reel slots which offers a bonus feature and that’s a welcome addition for those of us who enjoy the extra bells and whistles; aside from that it’s designed to the usual high standards of Pragmatic Play and it comes with an RTP of 96.51%.