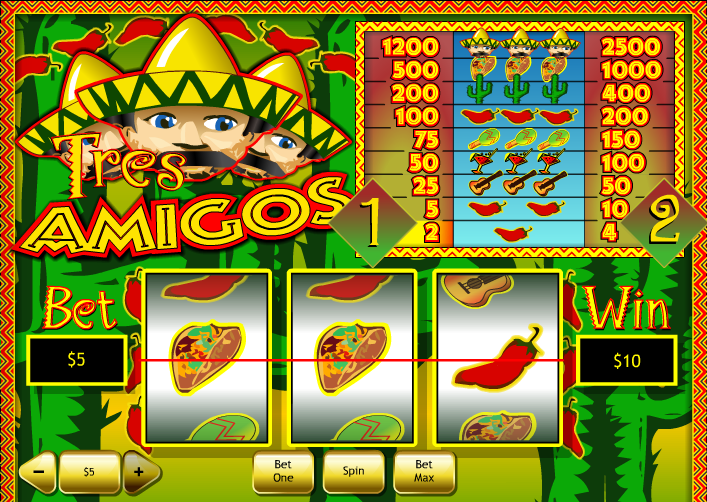 So you fancy something a little simpler to wile away those slots playing sessions during those gloomy winter evenings?  How about giving Tres Amigos a go; it’s the simplest of three reel online slots from Playtech and clearly based on three sombrero-wearing Mexican friends.  When we first saw the title we had a brief hope that it might be based on The Three Amigos – the comedy classic featuring Steve Martin, Chevy Chase and Martin Short – but our hopes were swiftly dashed.

Back to the slot in hand though and this is a three reel and one payline affair so you know where you are right from the start; there’s a range of Mexican symbols which wouldn’t look out of place on the wallpaper of a Mexican restaurant and these include chillies, guitars, cocktails, cacti, tacos and our three Mexicans themselves.

The chilli acts like the cherry does on most other there reel slots and will grant you a win for landing one, two to three on the single payline.

There’s very little you can change when playing this game and like other classic slots the only possible alteration is the level of betting.  Use the plus and minus symbols in the bottom left hand corner to adjust the basic bet from $0.01 to $5.00 and you can then use the ‘Bet One’ button to select the level of bets; this will effectively double the basic bet so the maximum becomes $10.

Two bet levels mean two payout levels so the prize for landing the Tres Amigos is either 1200x or 2500x your stake.

If you’re after the simple life than this could be the slot for you; three reels and one payline is the epitome of slots simplicity.  Keep the sound on and you’ll be rewarded with some great Mexican music and sound effects and it’s all very colourful to boot.