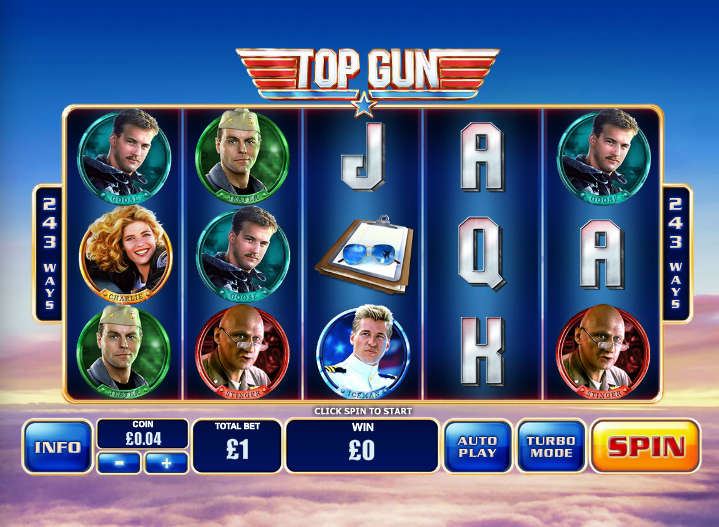 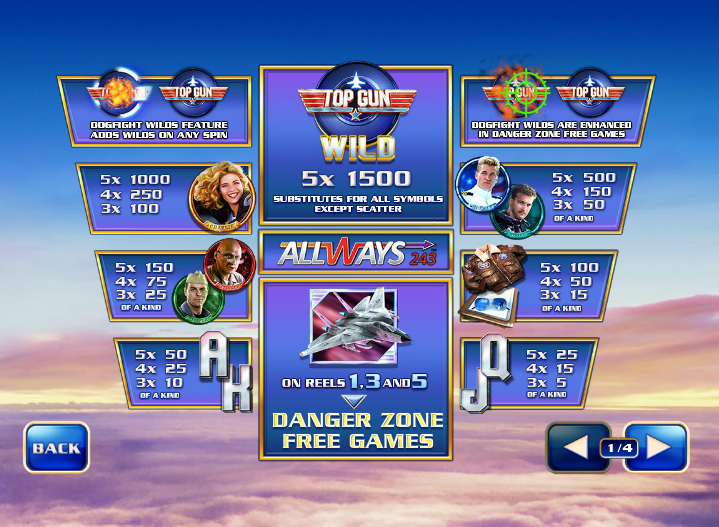 This has been a long time coming – the movie Top Gun was released in 1986 and was an iconic – but rather cheesy – story about trainee fighter pilots with Tom Cruise as the leading man. Well now you can spin the reels on this Playtech online slot and play along with Maverick, Goose and all the other oddly-named pilots in what is a high octane game featuring plenty of music and narrative from the film along with Danger Zone Free Spins and Dogfight Wilds.

Top Gun is a five reel slot with three rows and 243 ways to win; it loads up with the sound of Berlin’s Take My Breath Away and that tune continues as you start to play. It’s a simple design and the reels are placed against a backdrop of a sunset view above the clouds.

Characters from the movie make up lots of the main symbols including Goose, Jester, Iceman, Stinger and Kelly McGillis’ Charlie (you may well wonder where Maverick is – perhaps Playtech weren’t allowed to use Tom Cruise’ image.) J, Q, K and A make up the lower values.

The Top Gun symbol is wild and subs for all others except the fighter plane scatter which appears on reels one, three and five.

This can occur randomly during the base game or free spins and , as the game puts it “your wingman has your back…. [and] ….flies in to add extra wilds to the reels“. This means that up to fifteen wilds can be added to the reels which may clearly prove lucrative.

This is triggered by landing three of the fighter plane scatter symbols anywhere on reels one, three and five; you will now receive eight free spins with the possibility of triggering more by landing more scatters during this round.

The Dogfight Wilds are enhanced here and may addd more wilds if triggered.

We like Berlin as much as the next German but Take My Breath Away plays on a constant loop in the background so you may want to turn that off; the game itself is certainly good fun if not spectacular with some nice graphics and sound effects so it’s worth checking out. The RTP is 94.93%.