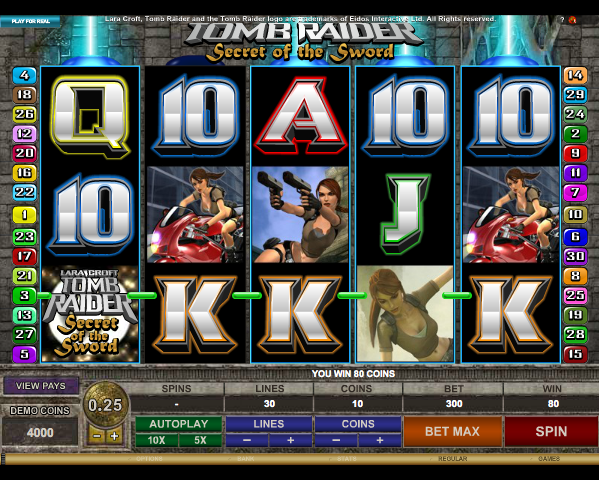 When Core Design released the original Tomb Raider video game way back in 1996 they probably never realised they were unleashing a cultural phenomenon on the game-playing public.  Many games and two feature films later, the Guinness Book of Records now recognises Lara Croft as the “Most Successful Human Virtual game Heroine”, a notable title indeed.

Microgaming have brought the Tomb Raider franchise to online slots fans, first with Tomb Raider and now Tomb Raider – Secret of the Sword and this is a game which fans of bonus features will love.  It’s a five reel and thirty payline slot with some appropriately Lara Croft-like music and sound effects.

The reels are set against the exterior of some sort of tomb with the low value symbols represented by 10, J, Q, K and A and their design makes them instantly recognisable to any video gamers.  Higher value symbols are all Lara in various action poses – in a black outfit, on a red motorbike, flying through the air while shooting and finally scaling a wall.

Special symbols are a green-tinged fragment which activates the free spins and a passport which is the key to the Global Adventure.  The close up of Lara is the wild.

Everyone likes a free spins round and Tomb Raider II doesn’t disappoint in this regard; landing three, four or five of the green fragment scatter symbols will win you ten free spins.

This bonus game also includes the Rolling Reels feature – this means that if you land a winning combination those symbols will dissolve and allow more symbols to fall into place.  With each consecutive Rolling Reels win the multiplier increases by 1 up to a maximum of 5x.

This is a random bonus which only occurs during basic game play and if you’re lucky enough to receive it you’ll get five free spins with randomly allocated frozen wilds.

During basic game play you will notice passport symbols on the reels; land one on the centre spot each reel throughout the course of your game (the machine will remember) and you will trigger the Global Adventure.  Activated reels are outlined in blue and lit up.

This is great fun if you can make it a long way and to begin with you’ll be presented with a world map and five locations – Bolivia, London, Ghana, Nepal and Tokyo.  On each location there are six artefacts from which to choose; it’s possible to reveal hidden treasure, a sword fragment or a trap.  Finding the sword fragment will allow you to continue to another location for more artefacts.  Unearthing two traps in one place will end the round.

This is a great game full of bonus features and it sticks faithfully to the style and design of the video games on which it is based.  The music is dramatic and appropriate and the graphics and animations are top quality.