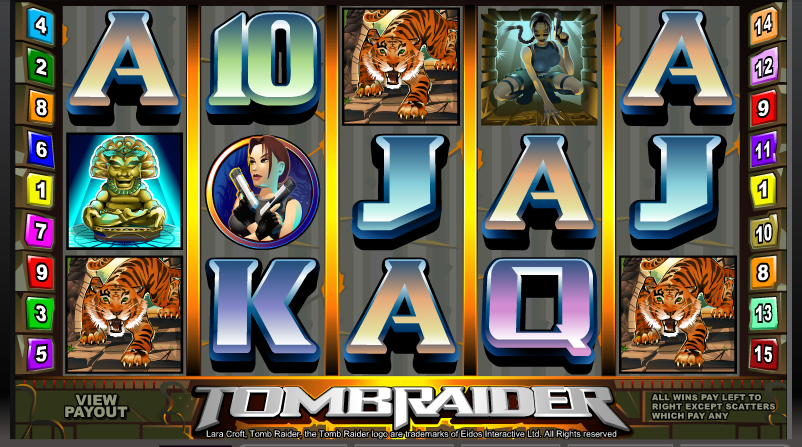 Any keen video gamer will be extremely familiar with the character of Lara Croft; back in 1996 the classy female English treasure hunter first hit the computer screens and has barely left since.  The most recent game outing was in 2013 and our heroine has also appeared in movies.  This Tomb Raider online slot is from Microgaming so let’s check it out.

This is a five reel and fifteen payline game which sticks loyally to the design and feel of the computer game – even the low value playing card symbols take their lettering style from the Tomb Raider logo.  The higher value symbols are a tiger, Lara in a familiar pose and a complex puzzle.

Special symbols are an idol which triggers the Tomb Bonus, Lara with a gun (the scatter) and a Tomb Raider wild symbol.

To trigger this short bonus game you’ll need to land three, four or five of the idol symbols on an active payline.  You will then be whisked to a screen showing a number of idols and you can pick three, four or five depending on how many symbols you landed initially.  Each idol is worth a cash amount and you’ll then be returned to the main game.

Landing three or more of the Lara scatter symbols will reward you with ten free spins; all prizes won during this phase will be tripled and the best are played at the same level as one which triggered the bonus.

Any slots fans who remember Lara Croft from the mid-1990s should give this game a go; the gameplay is complemented by a nice Lara Croft-esque soundtrack which isn’t from the original game but suits this slot nonetheless.