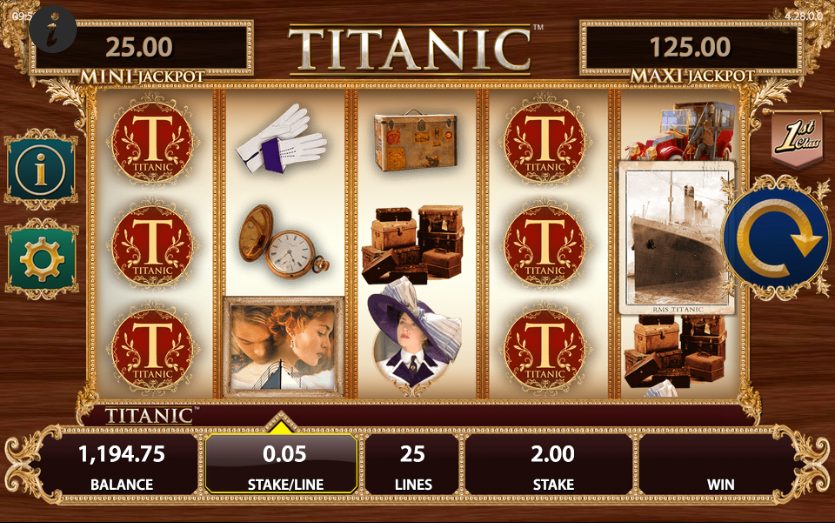 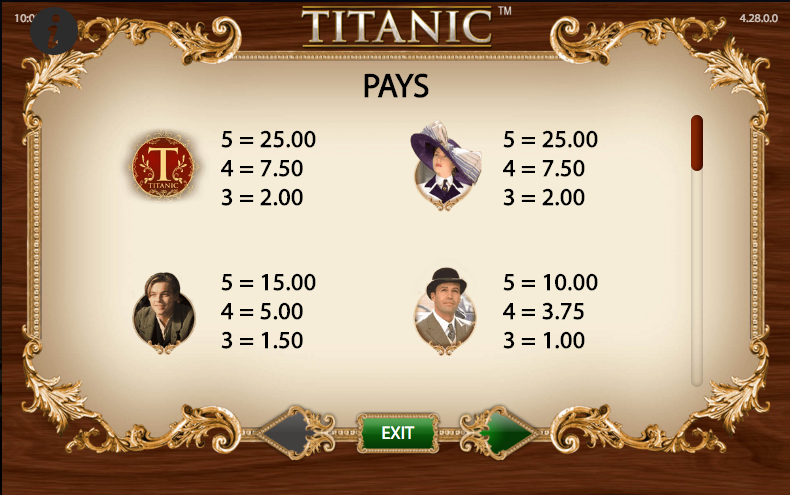 On the 15th April 1912, the RMS Titanic hit an iceberg in the North Atlantic and sank with an enormous loss of life; fortunately this online slot from Bally Technologies doesn’t commemorate that event but instead the 1997 award-winning film of that story starring Leonardo DiCaprio and Kate Winslet. Now take a deep breath as we review one of the most feature-packed games we’ve ever played.

Titanic is a five reel slot with three rows and twenty five fixed paylines; the game has a contemporary design and original music from the film plays along in the background as you spin the reels.

When the game starts the first thing you will be asked to do is choose which ticket you want to buy; this is essentially your stake level but the posher the ticket the more features are available to you:

The base game symbols are all related to the theme and include the Rose, Jack, two other characters from the film, a car, a pair of gloves, a pocket watch, a pile of luggage, a suitcase and a stack of cargo.

The Titanic logo is wild and will substitute for all others except the scatter symbols which are represented by the Jack & Rose icon and the ship – that ship is the key to main feature.

This is randomly awarded in the base game and it means that between two and five ‘double wilds’ will appear on reels two, three, four or five. A double wild symbol will substitute for all others except wilds and if it lands on a scatter it will transform that into a double wild also.

This is randomly awarded in the base game and two completely wild reels will be placed on the reel set. Scatters will be transformed into extra wilds.

This is triggered by landing three of the ship, wild ship or double wild ship scatters anywhere on reels one, three and five. It’s a Wheel Of Fortune game which offers a credit win (plus another spin) or one of the following four features:

This is randomly awarded after any spin and you will be asked to pick one of three tiles which will reveal a cash award, the Mini or the Maxi Jackpots. This feature requires a 1st/2nd class ticket.

This is a randomly awarded feature and you will be asked to selecta question mark from the ten available; keep picking until you’ve found three which match for a prize of up to 2000x your line stake. A ‘drawing wild’ acts as a wild here for the most valuable sketch.

It’s very marginal but playing with the 1st class ticket will raise your RTP slightly:

Fortunately Titanic isn’t as complicated to play as it is to describe and it’s reasonably quick to grasp once you’ve been spinning the reels for a while. We like it – it recreates the atmosphere of the film well enough and there are some big wins to be had within the numerous bonus features.