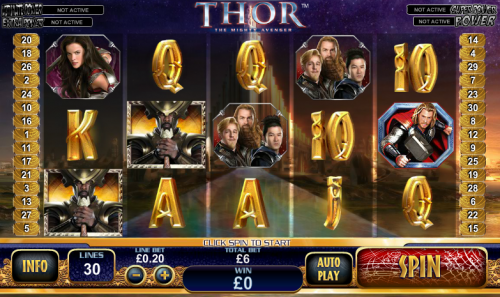 Thor The Mighty Avenger is an online slot machine based on the 2011 movie as well as the Marvel comic character which precedes it.  It’s probably fair to say that the film didn’t quite live up to the high standards set by other Marvel Studios films such as Iron Man or Hulk but it was enjoyable nonetheless and deserves a slot machine in it’s name.

This game is one of Playtech’s Marvel slots which means it’s connected to the Playtech progressive jackpot network; it’s a five reel and thirty fixed payline game with an assortment of Thor-related symbols but the low value ones are 10, J, Q, K and A.  The higher value symbols are all characters from the comic/movie with most expensive ones being Loki, Odin and Thor himself.

The scatter symbol is Thor’s hammer, Thor himself is the wild card and the Gatekeeper is an extra bonus symbol.

There are lost of bonus games in Thor and it took plenty of playing for us to get to grips with everything; here they are:

If you can cover all three symbols on reel two with Thor, you’ll get one valuable respin while the wild remains in place.

If Thor covers all three symbols on reel four, our hero will distribute between 2 and 5 wilds on to the reels which will stay in place for one free spin.

The feature is over when you are sent back to the Rainbow Bridge to pick an orb and choose ‘collect’ rather than a visit back to one of the locations.

As a Marvel slot all players will be eligible for Playtech’s progressive slot network with the potential rewards of Power, Extra Power, Super Power and Ultimate Power jackpots on offer – the more you stake, the higher your chance of randomly getting lucky.

It’s always difficult to find fault with Playtech Marvel slots and Thor is no exception; it’s smooth and entertaining with plenty of extras to keep you interested.  The fixed paylines mean that the minimum stake is £0.30 and the maximum is a hefty £600.