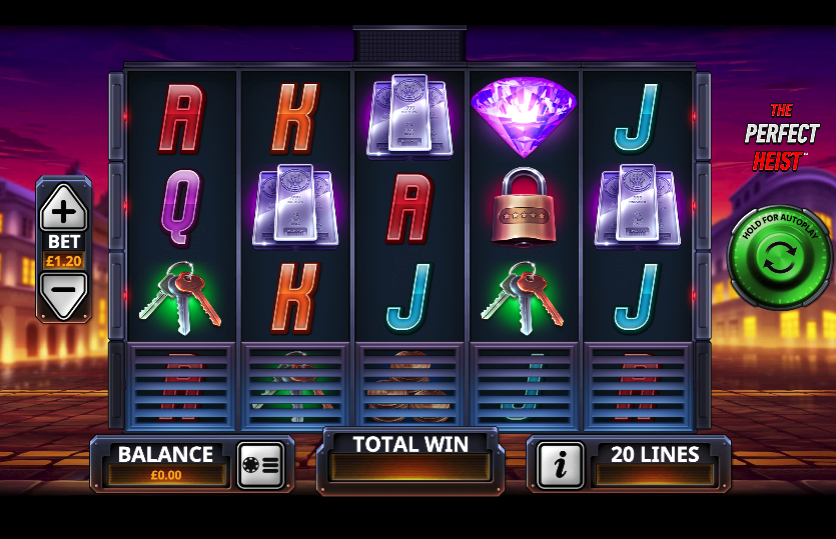 Pulling off a robbery with no chance of being caught is the dream of many a small-time crook but in this online slot from Playtech there are five criminals with special abilities who may just be able to accomplish The Perfect Heist; from £0.10 per spin this game tempts players with regular free spins triggered by just one scatter symbol.

The Perfect heist is a five reel slot with three rows and twenty paylines in standard gameplay; behind those hi-tech reels is a square flanked by buildings containing the riches our protagonists are after.

The high value symbols include a diamond, a stack of gold bars; some silver bars, a pile of coins, a padlock and a bunch of keys; J, Q, K and A are the lower values. The vault is the wild and the five crims are the scatter symbols.

It just takes one of the scatter symbols to trigger the free spins feature and each character appears on only one reel; when they land there the following spins and modifiers are awarded:

Of course it’s also possible to land more than one scatter on a particular spin and if that happens the various spins and modifiers will combine together for some extra excitement; all the possible combos are listed in the games’ paytable so we won’t repeat them all here but just to give one example landing the Safe Cracker, Inside Man and Demolitionist will award three free spins on 243 paylines with a win multiplier and random wilds on reels two, three and four.

The Perfect heist is clever, engaging stuff and of course it all revolves around the combinations of free spins and modifiers available; we’ll let the philosophers decide whether glorifying crime is a suitable theme for an online slot!