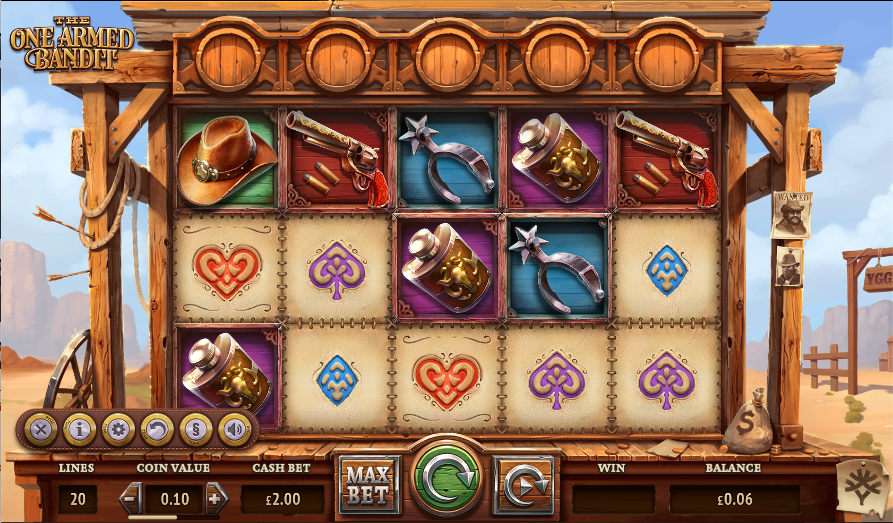 Let’s travel back in time now to the Old West where whisky and life were equally cheap and The One Armed Bandit sought to clean up his town by driving off the baddies; he’s the hero of this online slot from Yggdrasil Gaming which offers base game respins, free spins and multiplier wild symbols.

The One Armed Bandit is a five reel slot with three rows and twenty fixed paylines; a mournful guitar soundtrack accompanies your gameplay on wooden reels set on a platform with mountains and the desert in the background.

The four theme-related symbols include the pistol, the hip flask, the ten gallon hat and the silver spurs; playing card symbols in red, purple, green and blue represent the lower values.

The wild symbol is the gold sheriff’s badge, it opnly appears in the Base Game Respins and free spins and it will multiply any wins by 5x if it helps out with that win; the masked cowboy is the scatter which activates the main features.

This is triggered each time a scatter symbol lands on the reels in the base game and you’ll receive one free respin with that scatter turned into an extra wild. More scatters landing on the next spin will continue the process. Above each reel in which the scatters land the spaces will turn silver and if all five are silver then the free spins round is triggered.

This is triggered by landing one scatter on each reel or by filling all spaces above the reels during the Base Game Respins; you’ll receive ten free spins with a 5x multiplier for any wins which can be increased by landing wins with wild symbols involved.

Each scatter during this round will award one extra spin – two scatters increase the win multiplier by 5x and two more increase it by 10x.

Yggdrasil Gaming always come up with goods and The One Armed Bandit is no exception – it’s designed to a high quality with some clever bonus features and atmospheric sound effects – what’s not to like?