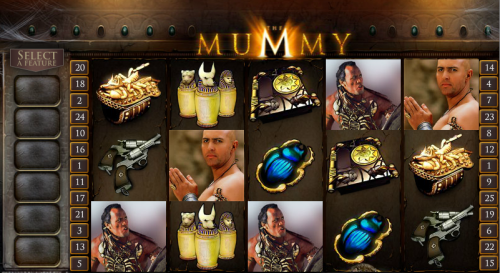 Slots fans who like bonus features on their games will absolutely love this new online slot from Playtech; it’s called The Mummy and it is of course based on the first in the series of films set in early 20th century Egypt and starring Dwayne Johnson and Rachel Weisz.

This is a great game with a dramatic cinema-style soundtrack; there are five reels and twenty five paylines and the whole design of the slot is impressive; there are are a whole range of theme-inspired symbols including a blue beetle, yellow containers, pistols, a locked book, a treasure chest with a golden scorpion on top.  All the main characters from the film are also represented in the symbols and the half-decomposed Mummy is the wild.  The game’s logo is the scatter symbol.

This is where all the fun starts and but not all the features are available when you start playing;  you will need to be randomly awarded entry into the Lost City Adventure and then you’ll be taken to a screen where you pick from a number of boxes to win cash prizes.

The following bonuses are added to the reels permanently:

This is fantastic slot for those who like loads of bonus features and longevity in their game play.  Once you start randomly landing the extra features you’ll be hooked.