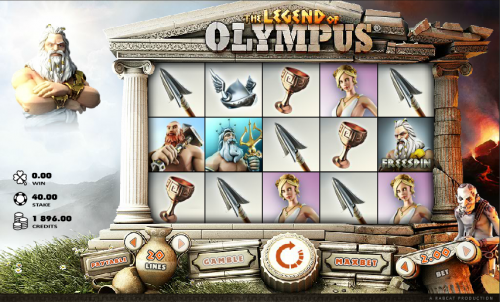 If you thought games developers such as Net Entertainment had a monopoly on stunning graphics then it’s time to think again; The Legend Of Olympus is an online slot machine by Rabcat which easily matches anything we’ve seen before from their competitors.

It’s a great looking game which has as it’s background the gods and stories of Olympus.  The Olympians were the twelve Greek gods who lived on the mountain  and they figure strongly in this slot.

The beautifully animated figure of Zeus watches over proceedings from the left hand side while on the right Hades, God of the Underworld, looks menacing.  Consequently temple which houses the reels looks gradually more dishevelled and ruinous as you move from left to right.

The symbols are all game-related and we have a spear, a golden goblet, a winged helmet, a shield,  Ares, Aphrodite, Poseidon and Hades (also the wild symbol). Zeus himself is the free spin symbol while a gold coin represents the bonus symbol.

This feature is triggered by landing three of the Zeus symbols anywhere on the reels.  Zeus will then zap Hades with some lightning bolts several times, each time revealing a number of free spins.  When the zapping has finished, Hades falls over and leaves the screen.

The free spins now start and as you can see from the video below, it’s possible to earn more spins by landing three more Zeus symbols.

This is triggered by landing three of the gold coin bonus symbols anywhere on the reels and you’ll be shown three spinning gold coins – ideally you want to click on all three and uncover two gold ones which will take you to an area where more prizes are available.  Whatever happens though you will win a decent amount of money for getting to the bonus feature. 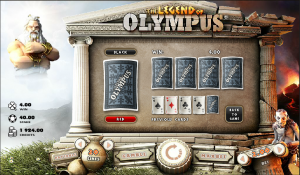 The Gamble feature is enabled each time you land a win in standard play and it gives you the opportunity to play a double or nothing Red/Black card game which you can continue playing until you win a fortune or end up with nothing.

All you need to do is choose red or black and if the card revealed is that colour your win is doubled.  The feature also shows the recent card colours so if you wish you can use that to make your choice.

The stunning graphics are what really draws the eye to this game but Olympus plays really well also; there are five reels and up to twenty paylines with a minimum bet of €0.01 per payline and a maximum bet per spin of €40.00.