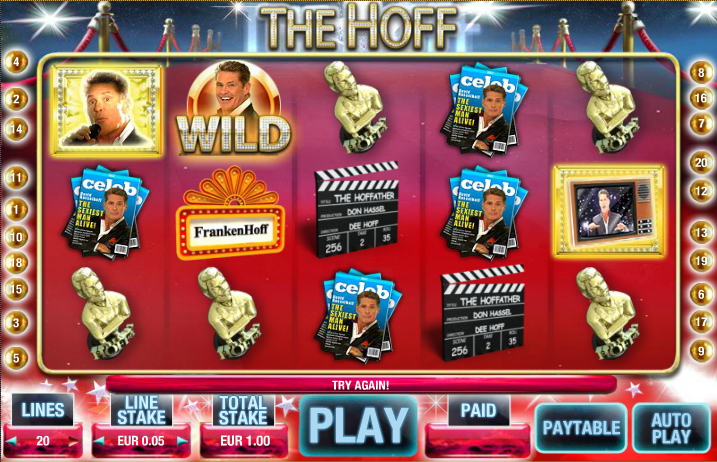 How many people are there in the world who can identify themselves by placing the word ‘The’ in front of their name?  Not many that’s for sure; in fact we can’t think of anymore and it’s quite possible that David Hasselhoff is in a league of his own.  That makes him an ideal theme for an online slot machine and Openbet have taken up the challenge  to produce something entertaining.

The Hoff is a five reel and twenty payline game celebrating the career of this actor, singer and star of Baywatch;  through the reels we can see the gold railings either side of a red carpet and the flashes of paparazzi cameras light up the scene.

The symbols are all Hoff-related and we have a clapperboard, a ‘Frankenhoff’ sign, an award, a picture of the ‘Hoffywood’ hills, one of the Hoffs’ CDs, the man himself on the cover of a celebrity magazine, with a microphone, on a roll of film and on television.

Special symbols are a Hoff wild, the Hoff star bonus, a Hoff spins symbol and a big pile of cash which activates the cash bonus.

Nice and simple this one – land three of the cash pile scatter symbols and you’ll get to select from several items to reveal a cash prize.

Three or more of the Hoff spins symbols in any position on the reels will reward you with entry into the Hoff Spins Bonus; you will be awarded a certain number of free spins but the reels will change slightly to include the  Super Wild.

If you land a Super Wild it contains a number which indicates the number of spins it will remain in place for.

This is the most fun and to trigger it you’ll have to land three of the Walk of Fame stars anywhere on the reels; the screen will now change to a track split into segments each worth increasingly higher amounts of money.  Your task is to guide the Hoff along the track in his little car to win the greatest amount of money.

You begin with three lives and each time you spin the wheel the result will be moving one place forward or remaining in place.  Each time you stay out you’ll lose a life; move on and the number of lives will be set back to three.

This is a great slot with some funky sound effects, top quality graphics and animations (witness the man crooning into a microphone if his symbols match).  There are also loads of bonus games to keep you amused and this is one game you will find yourself coming back to.