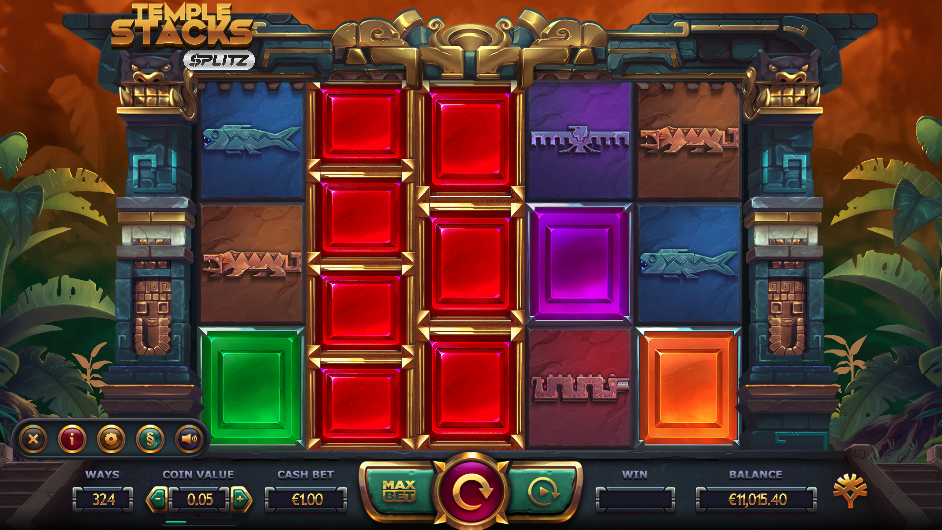 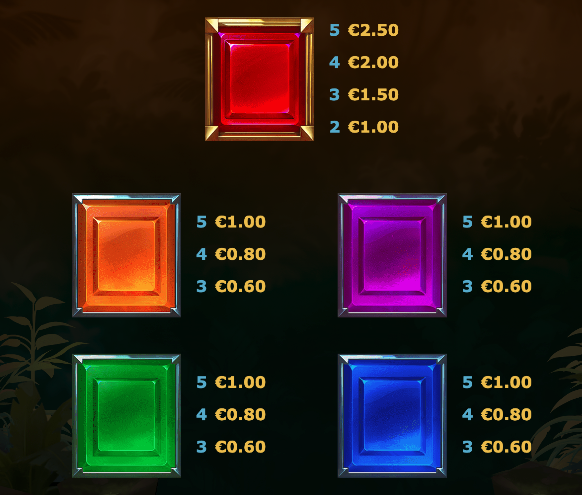 Those Aztecs certainly knew a thing or two about constructing temples but they’re knowledge of the technology behind online slot machines was virtually non-existent; that doesn’t matter to us however because we’re still able to play games such as Temple Stacks: Splitz from Yggdrasil Gaming and enjoy the Aztec-themed free spins and splitting reels.

Temple Stacks: Splitz is a five reel slot with three rows and two hundred and forty three ways to win in the base game; those reels spin within an ornate, blue and gold stone structure nestled in the Amazonian undergrowth.

The five higher value symbols are all coloured rocks (or perhaps gems) of different colours – red, orange, purple, green and blue; rocks carved with animals – a snake, a crocodile, a bird, a lizard and a fish – represent the lower values.

The Mystery Stack can occur on any reel and on any spin and once landed it will transform into matching symbols which may help you out with a win. This reel can have up to nine positions which means there’s a potential 248,832 ways to win with all reels landing in that way.

Landing two of the wild/free spin symbols in view will award one respin with those symbols held in place.

Landing three, four or five of the wild/free spin symbols anywhere in view will award 3, 4 or 5 free spins respectively; there are four free spins modes which are unlocked on the first four bonus triggers:

Landing at least three wild/free spins symbols during this round will award more spins according to the level you’re in.

There’s a touch of the Megaways about Temple Stacks: Splitz but there’s enough differences here to appreciate an innovative and atmospheric slot with plenty of chances to grab some big wins. Keep playing to unlock those free spins modes!