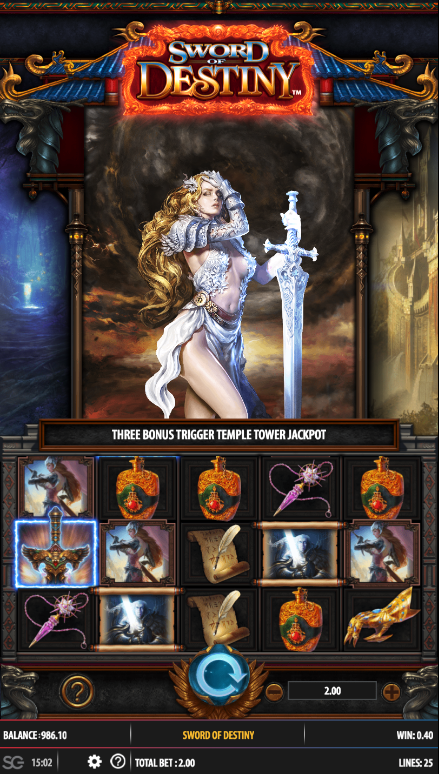 Giving a weapon a title such as the Sword of Destiny must certainly add some value in the minds of those who would like to wield it and there are various characters in this fantasy-themed online slot from Bally Technologies who aim to do just that. This game comes with some great graphics and several bonus features and you can find out how it all works right here.

Sword of Destiny is a five reel slot with three rows and twenty five fixed paylines (this can increase though); half of the screen area is taken up by one of the game’s characters and this space becomes necessary during one of the features. There’s some dramatic, fantasy-themed music to accompany your gameplay.

All the symbols are related to the theme and include ‘Sword Man’, ‘Sword Lady’, a flask, a glove, a necklace, a scroll, the evil knight and the castle.

The wild symbol is the sword itself an it will substitute for all others to help form winning combos except for the XZone and glowing coin icons.

One of the following four features can be triggered randomly on any base game spin and two more rows will be added, expanding upwards into the character area:

This is triggered by landing at least three of the XZone symbols anywhere in view and you will initially receive eight free spins; every win during this round will be multiplied by up to 10x and each Xzone symbol landing will award one extra spin.

The glowing coin symbol won’t appear on the reels in this round and there’ll be no wild on reel one.

Trigger this by landing three of the coin symbols anywhere on reels one, three and five in the base game and a sixteen step ladder will appear on the screen. You now receive three picks from a total of twenty coins, each awarding up to six steps up the ladder – the higher you get, the bigger the prize.

Sword of Destiny is a well thought out game which looks great and comes with a number of creative bonus features; the size of the reels makes this a more mobile-friendly game so perhaps it’s better to fire up your device rather than your laptop. This game comes with an RTP of 95.94%.