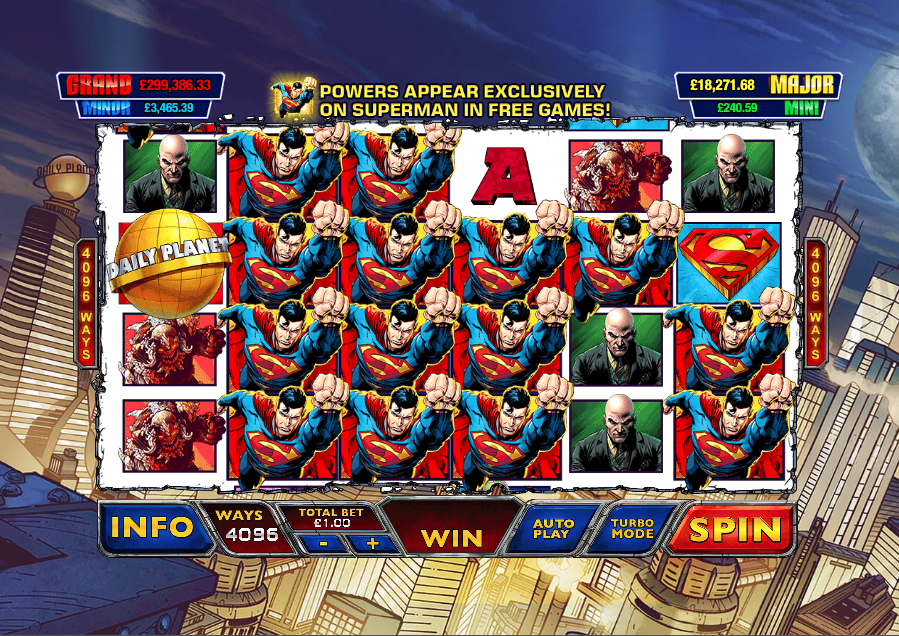 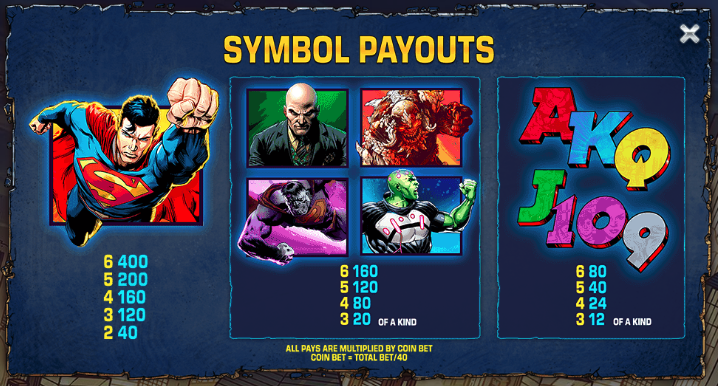 The Man of Steel has found himself the theme of various online slots over the years and here the DC Comics superhero returns once more in this Playtech/Ash Gaming releases; it’s called Superman Comic and it promises players free spins, powered-up symbols and a progressive jackpot.

Superman Comic is a six reel slot with four rows and 4086 ways to win (Playtech’s ‘AllWays’ structure); the comic art inspiration is clear here as those reels float above the illuminated city under a clear moonlit sky.

Superman is the highest value symbols and he’s joined by four villains whose plans he presumably must foil; 9, 10, J, Q, K and A make up the lower values.

Superman’s badge is wild and it will substitute for all standard symbols to help form winning combinations; the Daily Planet logo is the scatter symbol which activates the main feature.

On any spin in the base game any symbols except the wild and scatter may expand to the four adjacent positions if a win is possible by doing so.

Landing three, four, five or six of the Daily Planet logos anywhere in view will award 5, 15, 25 or 100 free spins for your pleasure; once the round is underway more spins can be won in the same way but now just two scatters will also award 5 free spins as well.

During this round only Superman can be a Power Symbol.

This is triggered randomly on any spin and if you’re lucky enough to reach this then a win is guaranteed; you’ll play a game in which you must pick from twenty cells until you find the required number of matching balls to match one of the jackpots shown above the reels. They are Grand, Major, Minor or Mini.

Superman Comic feels like a bit of a retro slot but perhaps that’s just the comic book style design; the progressive jackpots are the icing on the cake but the spongy bits are the free spins and Power Symbols.