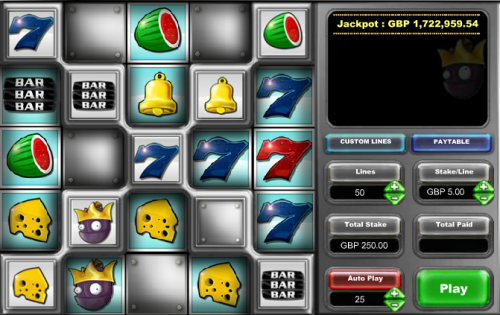 Some of the slots we review defy any sort of characterisation and it’s fair to say that calling them ‘slots’ is not entirely factually correct.  Supercubes by OpenBet is one such online offering which takes gaming to a whole new level.  We can only speculate as to what sort of tortured brain came up with the concept behind this slot but we’ll do our best to explain what’s happening.

As you can see from the screenshot above, the action takes place on a 5 x 5 grid and most of the symbols will be familiar to those traditional slots fans; from the lowest value to the highest we have a melon, the triple bar logo,  a red seven, a blue seven, a lump of cheese, a bell and finally the king plum, five of which will win you the jackpot. There’s also a green seven which acts as a wild symbol.

There are fifty paylines on which to win and it’s worth checking out the payline chart to view all the odd ways in which you can make winning combos.  The nature of the game means there’s lots of ‘L’ shaped win lines.  Interestingly, four symbols in a row will also contain a win of three symbols in a row, winning you more money.  If you click on the ‘custom lines’ button you can pick any or all of the paylines to be active as you wish and the stake will be adjusted accordingly.

So to the movement of the reels and the giant ‘X’ shape on the board remains stationary all the time although the symbols on it change.  The rest of the spaces are filled in by a board underneath the ‘X’ which rotates clockwise before it comes to a stop; some of the symbols on the ‘X’ and on the rotating board are blank and contribute nothing to your efforts.

The way the game works seems to generate a lot of small wins and every time you land a winning combo the board cycles through all your prizes, complemented by a screen on the top right which shows your total winnings for the spin and each individual reward.  Underneath that screen are a whole range of options related to the game.

We like Supercubes; it’s an innovative take on a traditional formula but you may need a short lie down after playing it.  It’s connected to OpenBet’s progressive jackpot which is triggered by landing five king plum symbols.  Wagers can be as little as £0.01 for one payline or up to £5.00 per payline for a total spin bet of £250.00.