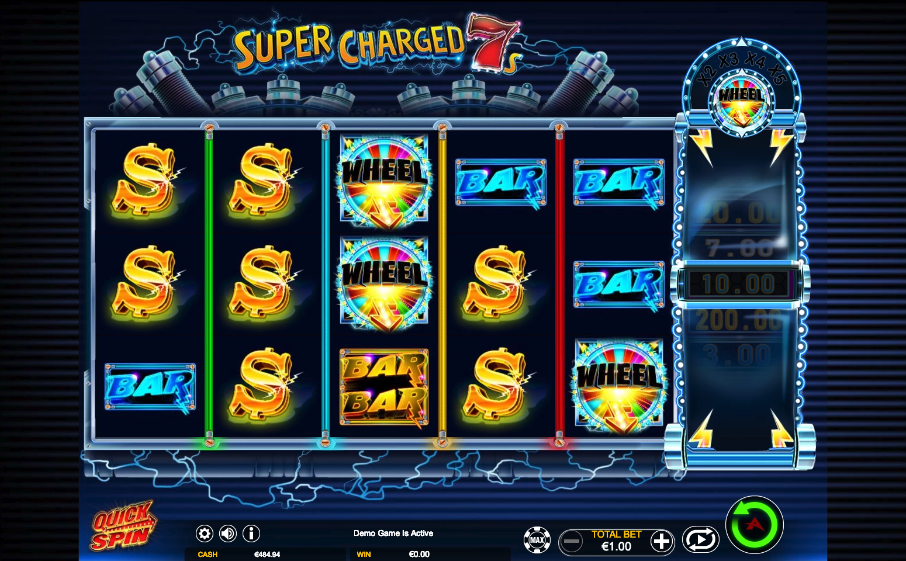 The crackle of electricity and the glow of neon lights sets the atmosphere of this online slot machine from Ainsworth Gaming; it’s called Super Charged 7s and it combines fizzing static charges with two tasty bonus features.

Super Charged 7s is a five reel slot with three rows and forty fixed paylines; those buzzing reels are joined onto some dangerous in the background-looking equipment and there are some beeping, hissing sound effects to keep things interesting.

There are six standard symbols and they include red sevens, single/double/triple bars, cherries and gold dollar signs – the bars will also pay mixed.

The wild is a huge diamond which will replace all others to help form winning combos except for the Bonus and Wheel special symbols.

This is triggered by landing at least six of the Wheel bonus symbols anywhere in view; the special reel on the right will now spin to reveal a prize amount. If the round was triggered with six wheels there’s no extra multiplier but it increases by 1x with each extra wheel up to a maximum of 5x.

The bonus symbol appears on reels one, three and five and landing three in one spin will award eight free spins which can be retriggered via the same process during the feature.

There’s nothing extra going on in this round so just sit back and enjoy the spins!

Super Charged 7s is probably one of our favourite Ainsworth slots with its cartoon-style graphics and engaging bonus features; the RTP is a slightly lower than average 93.04% so bear that in mind.