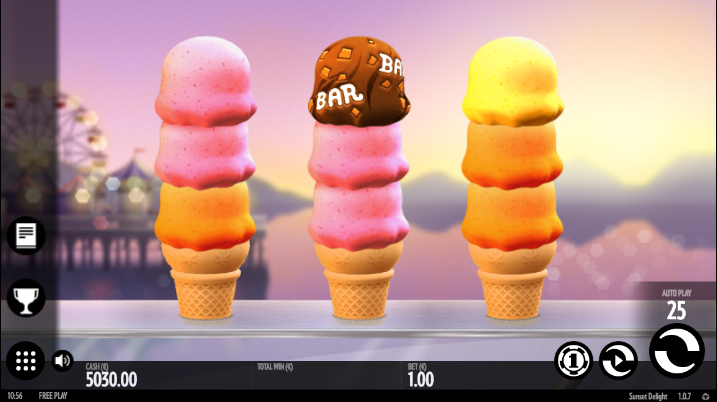 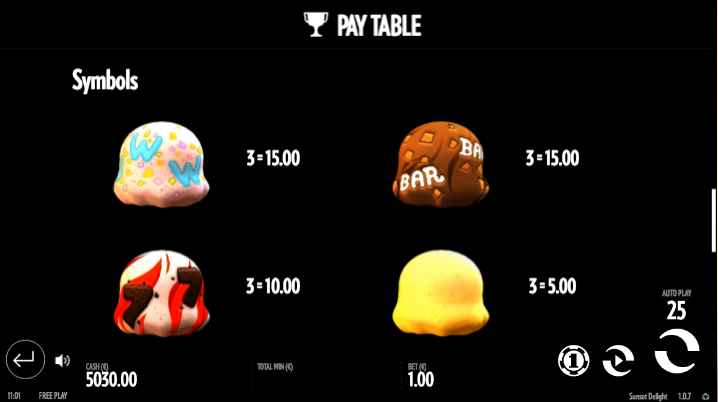 When you first load up this charming releases from Thunderkick Games you may well think that you’ve played it before, such is the graphical similarity to Sunny Scoops from the same company. However Sunset Delight is a different game with different features and you can read all about it below.

Sunset Delight is a three reel slot with three rows and just five fixed paylines; the symbols are scoops of ice cream which are served onto cornets each time you press the ‘spin’ button and if you look closely into the hazy background you can just make out a funfair on a pier reflected in the calm surface of a lake at sunset. 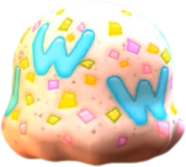 There are five basic ice cream scoop flavours/colours and these are stripey red, brown, yellow, pink, orange and purple.

The wild symbol is a sparkly scoop with a blue ‘W’ on the side and it will substitute for all others except the scatter – that’s a traditional wafer which can appear within a scoop and it’s the key to the main feature. 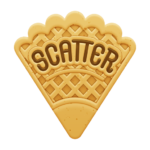 This is triggered by landing one of the wafer scatter symbols on each reel; you will now receive an initial five free spins on a set of reels which just adds more scoops to the existing stacks rather than replacing them with new ice creams each spin.

If you like Sunny Scoops then you’ll like Sunset Delight as well; it looks almost identical but in fact it’s quite different, it comes with a clever bonus feature and an RTP of 96.30%.