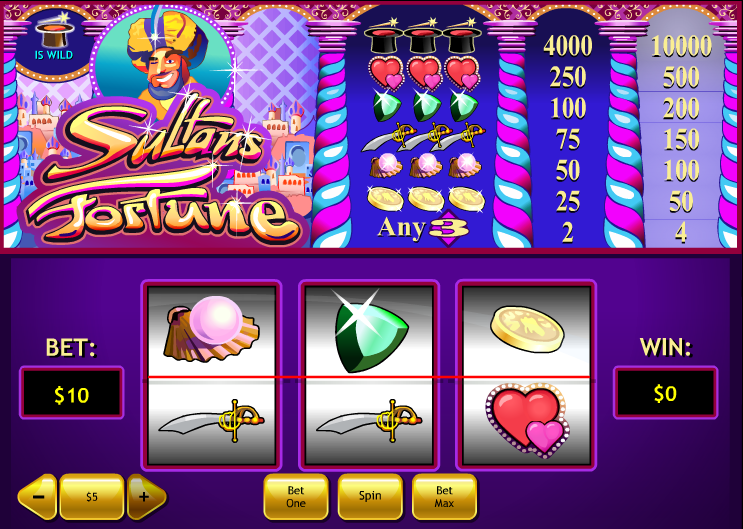 Three reel slots may not be everyone’s cup of tea but they do offer a quick an easy online slots experience without any need to understand payline structures or complex bonus features. One clicks the ‘Spin’ button and away you go. Sultan’s Fortune is one such game and it’s theme is the mysterious Middle East at a time when characters such as Aladdin and the Genie strutted their stuff. This slot is all about the Sultan though so read on to find out more.

Sultan’s Fortune is a three reel slot with just one single payline so it’s pretty easy to tell whether you’ve won or not. The paytable sits above the reels, just to the right of the Sultan himself who appears to be winking at you as he surveys the pastel-coloured minarets of this Middle Eastern city. The reels themselves are a lesson in simplicity with just two rows visible.

The symbols are mostly related to the theme and include gold coins, an oyster/pearl, a cutlass, a green gem, hearts and a top hat. The top hat is the most valuable symbol, worth up to 10000x your stake; it’s also a wild symbol and will substitute for any other icons to form a winning combination. One wild in a combo will multiply the win by 2x, two wilds will multiply it by 4x.

Get things started by selecting your stake with the ‘+’ and ‘-‘ buttons below the reels; this ranges from £0.01 up to £5.00 per spin. You can then use the ‘Bet One’ button to double that stake and double any potential winnings.

Although there’s a wild symbol, Sultan’s Fortune remains the simplest of three reel slots. What we do like is the really high RTP of 97.26% which may make up for a lack of any bonus features.