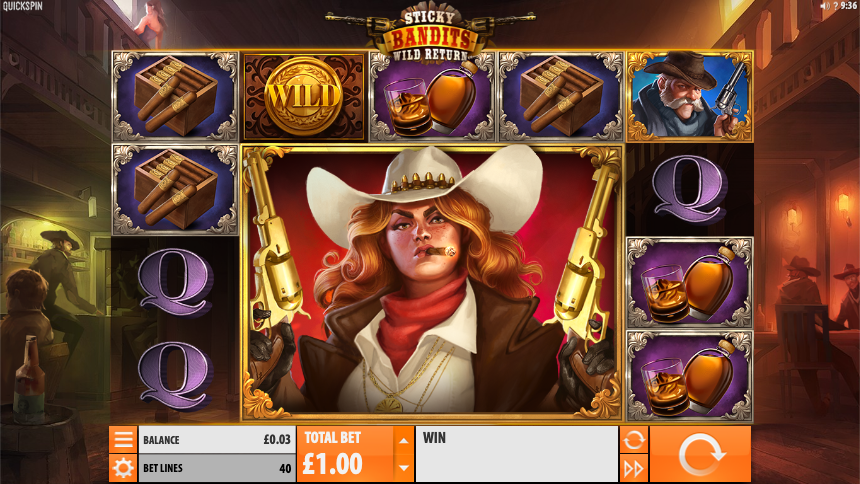 Fans of Quickspin online slots will be pleased to hear that those Sticky Bandits have reformed to take part in a sequel called Sticky Bandits Wild Return; it’s bigger than the original and promises players free spins and giant symbols.

Sticky bandits Wild Return is a five reel slot with four rows and forty fixed paylines; the setting for the gameplay is the interior of a smoky, gloomy saloon with the bar downstairs and the party rooms on the first floor.

The three bandits in this story are the higher value symbols along with whisky and cigars and those characters can all appear as large, 2×2 or 3×3 symbols on reels two to five; J, Q, K and A make up the lower values.

The wild is a gold ‘Wild’ which will substitute for all standard symbols; the skull is the bonus symbol and there’s a little slot machine which can appear on reel five.

Landing the slot machine on reel five will award one, two or three spin on the Quick Slot with a chance for a win of up to 500x your total stake.

This is triggered by landing three of the skull bonus symbols on reels one, three and five for which you’ll receive seven free spins; when a bandit lands on the reels a shot will transform one other symbol into a wild – if it’s another bandit the wild will turn sticky and stay there until the round ends. If a lucky shot hits a large bandit the whole thing will turn into a sticky wild.

We liked the original game and Sticky Bandits Wild Return makes it even better with more massive symbols and a free spins round with some extra prize-winning elements; chuck in the Quick Slot and it’s a game to recommened for sure.