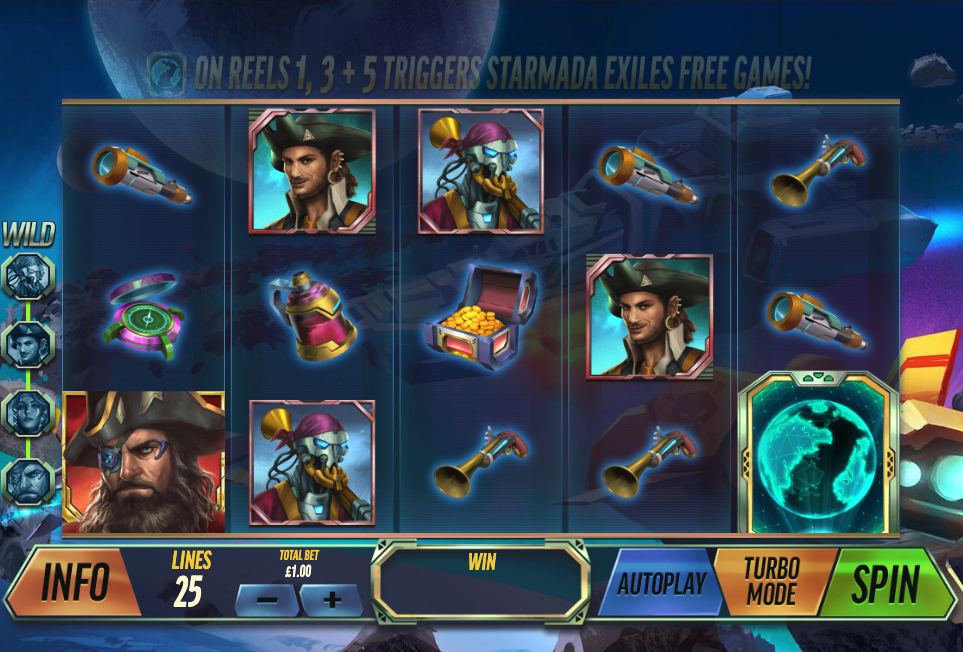 The twin themes of space travel and piracy combine with entertaining effect in this online slot machine developed by Playtech/Ash Gaming; it’s called Starmada Exiles and it tells the story of a group of galactic travellers searching for plunder, and free spins among the stars.

Starmada Exiles is a five reel slot with three rows and twenty five fixed paylines; all the action takes place among the distant worlds and spacecraft which make up this tale.

The high value symbols are the ‘Exiles’ and they are the pirate captain, the green girl, behatted chap and the tooled-up robot; the lower values are still related to the theme and include the chest of gold, the tankard, the compass, the futuristic blunderbuss and the telescope.

The golden ‘Wild’ is wild and it will substitute for all standard symbols to help form winning matches; the holographic planet is the bonus symbol.

Landing two planet symbols on reels one and three will trigger the Plunder Bonus and all you have to do is pick one of those symbols to reveal one of the following:

Trigger this by landing three of the planet bonus symbols on reels one, three and five to receive ten free spins initially although this round can be retriggered in the same manner.

Your task is to collect rubies on reel five because each three nabbed will turn one of the exiles into a wild symbol (along with any transformed in the Plunder Bonus). Also look out for emeralds during this round which will pay cash prizes when they land  – if any are left on the reels when the round ends they’ll turn into planets which may retrigger the whole feature.

Starmada Exiles is an enjoyable romp into outer space with some interesting and interconnected bonus features to experience – uncovering an exile in the Plunder Bonus will encourage you to stick around for the free spins.