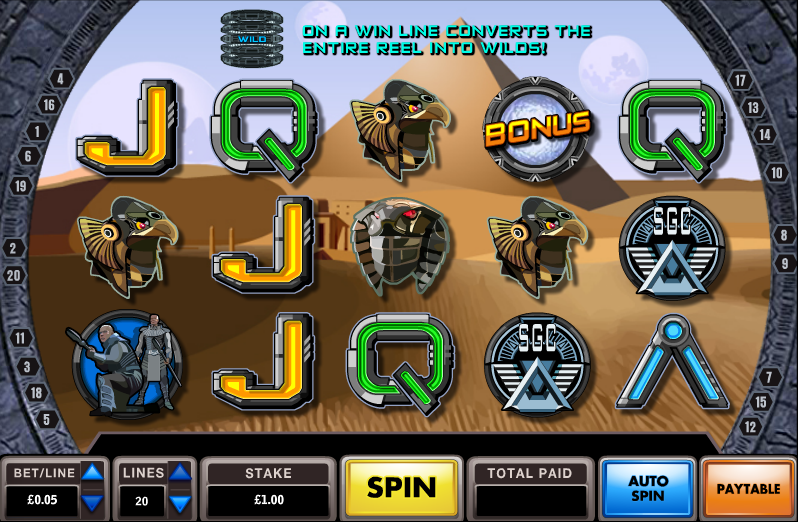 Stargate SG1 was the television series based on the 1994 movie and while the TV version will never be viewed in the same light as Star Trek or Doctor Who, it certainly had a strong cult following. Therefore there’s no reason why it can’t be the basis for a decent online slot and that’s just what we’ve got here; it’s developed by Fremantle so read on to find out more.

Stargate SG1 is a five reel and twenty payline slot and the symbols float in a pleasing way in the centre of the Stargate. The background is the alien planet to which the characters travel, it’s Egyptian culture makes by a large pyramid.

Aside from the standard J, Q, K and A, the symbols are from the movie and include a weapon, two of Ra’s soldiers, two Egyptian-style masks, an Eye of Horus and a pyramid.

The game’s logo is the basic wild but there are two specialist wilds – Transporter Rings and Mother Ship – of which more below. The Stargate bonus symbol is the scatter which activates the feature.

Land three, four or five or more of the Stargate scatter symbols anywhere on the reels and you will trigger 10, 15, or 20 spins respectively. All wins will be subject to a 2x multiplier and the extra good bit is if you can re-trigger the spins, the multiplier will increase by 1x up to a maximum of five.

This is an engaging slot to play – despite it’s relative age it looks good, contains some nice animations and sound effects. The bonus features complement the gameplay nicely and this is to be recommended.