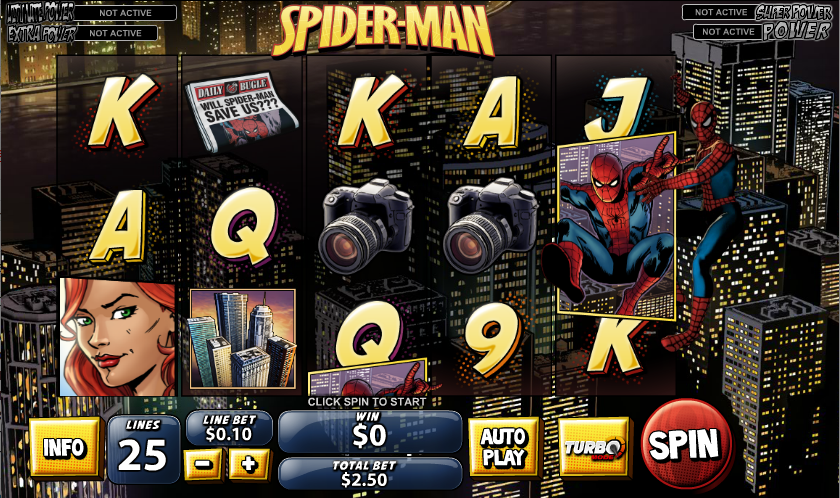 There’s a palpable excitement around these parts when we get to try out a new Marvel slot and we’ve been looking forward Spider-Man for a long time.  This is not to be confused with Cryptologic’s dated Amazing Spiderman; Attack of the Green Goblin is from Playtech, master of the Marvel slot conversion. Being a Marvel slot it also contains the Playtech progressive jackpot.

What we have here is a five reel and twenty five payline game which is packed with bonus features and is accompanied by an appropriately dramatic soundtrack.  The transparent reels are set against a background of night time skyscrapers and all the main symbols are Marvel-related so include the Daily Bugle, a camera, skyscrapers, Mary Jane Watson and the Green Goblin.  Basic symbols are 9, 10, J, Q, K and A.

The bonus symbols are a wild labelled ‘Wild’ and a Spider-Man bonus which activates the many bonus games.

These two features are randomly activated in the main game but can’t both be triggered together.

This is the main bonus feature and you can activate it by landing three of the Spider-Man bonus symbols on reels one, three and five.  Comic books will fly past in front of you so click ‘stop’ to select one and begin one of the following five games: 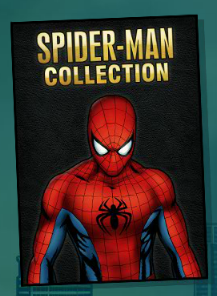 Now for the big money and most slots fans will be familiar with the Marvel progressive jackpot.  It’s randomly activated but you have more chance of winning the bigger your stakes.  If you are lucky enough to land it you’ll be given the chance to pick matching jackpot symbols on a 5 x 5 grid.  The biggest jackpot is Ultimate Power, followed by Super Power, Extra Power and Power.

This is a brilliant slot with a seemingly endless variety of bonus games, top notch graphics and clever features; the soundtrack is dramatic the Marvel progressive jackpot just complements the fun.  Try this now!