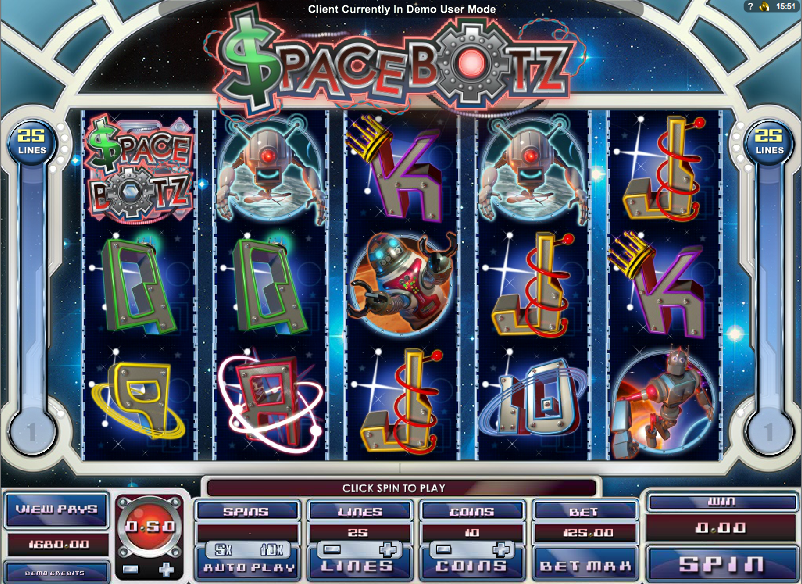 We’re heading of into the gloomy depths of outer space to check out this online slot machine from Microgaming. We are also in the company of the Space Botz, useful little robots who appear to have a practical purpose but who attempt to take over the universe when your back is turned and the bonus feature is triggered.

Space Botz contains five reels and twenty five paylines and through those transparent reels we can see a wide vista of planets and stars, twinkling in the endless void.

The lower value symbols are represented by playing card symbols all dolled up in a futuristic way but the higher value symbols are theme-related and include a satellite and three separate robots. One of them looks suspiciously like Robby the Robot from Forbidden Planet but that’s probably just a coincidence.

The Space Botz logo is the scatter symbol which activates the feature and there’s a type of exploding green atom symbols which is wild.

This is where the robots start to think they can take over the universe and you can trigger this mini-game by landing three, four or five of the Space Botz scatter symbols anywhere on the reels.

You will only get five free spins which may not sound like a lot but for the duration of the feature all the robots will be wild (as they need to be to take control of the universe). This will obviously help out in creating winning combinations and you can see it in action in the video below.

It’s also possible to re-trigger the spins from within the feature to receive another five free goes.

As a player the only thing you can change here is the bet amount and the number of paylines; low rollers may like to play with minimum paylines safe in the knowledge that they will still have the same chance of triggering the feature with the scatter symbols.

There’s not too much wrong with this game although we could recommend more recent space-based games such as Big Bang and Space Wars for science fiction fans. This looks good though and the sound effects are appropriately quirky.