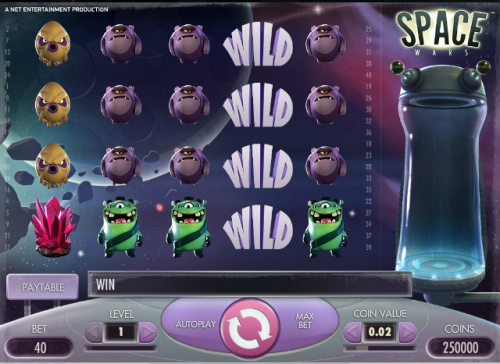 There seems  to have been a steady level of anticipation regarding the latest online slot from Net Entertainment; fans of the genre will know that Space Wars has been trailed for some time and now it’s here so after a couple of days play we can tell you all about it.

The game itself tells the story of a number of different alien species battling to capture a powerful crystal but any narrative takes second place to the gameplay; it’s a very nice looking game with some incredibly cute looking characters who can also be incredible violent to each other.  There are plenty of 3D effects when you land winning combos and it’s all set against a well-rendered stellar background.  Off to the right hand side is a the cloning chamber, one of the main features of this game.

This is a five reel, forty payline slot with four rows and it features five different aliens with the smaller ones worth the least while the more valuable aliens are larger, armed versions of the smaller ones; from lowest to highest value they are coloured as follows – purple, blue, green, olive and orange.  There is also a ‘wild’ symbol and the really valuable red crystal symbol.

While Space Wars doesn’t have any special bonus games as such the big draw is the cloning chamber to the right of the reels.  It took us a little bit of time to work out what was going on but read on and you won’t need to guess.

If you spin a winning combo in normal gameplay the characters which formed the win will be whisked into the chamber and cloned.  The next spin now becomes a free re-spin with extra stacked, clone characters on the reels, increasing the winning possibilities.  What this means is that a winning spin is usually worth at least double when the re-spin is taken into account.

As an extra feature, if the winning symbol is one of the larger aliens and you land a win featuring him on the re-spin, you’ll get a small animation of the character waving his gun around in a dangerous way.

In general we prefer a proper bonus game but Space Wars has enough charm and innovation overlook that omission.  The forty paylines are fixed so the minimum bet per spin is £0.40 while the maximum is £200.00.