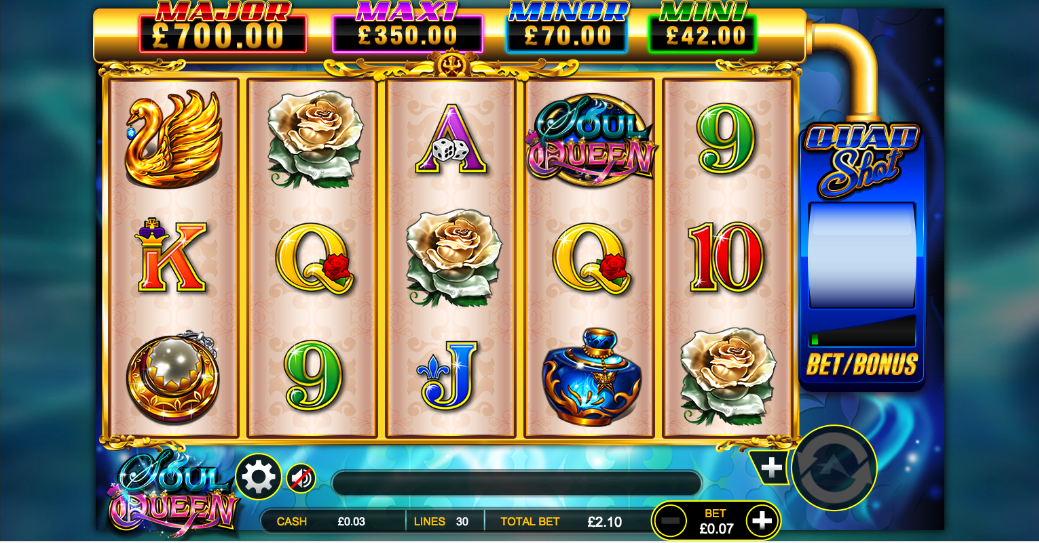 The title of this online slot machine has us hoping that it was themed on a 1970s disco diva but that doesn’t seem to be the case; Soul Queen Quad Shot involves jewels, expensive items, free spins, several jackpots and it’s developed by Ainsworth Gaming.

Soul Queen Quad Shot is a five reel slot with three rows and thirty fixed paylines; those gold-rimmed reels are perched underneath the four Quad Shot jackpots which are connected to the sixth reel on the right hand side.

The high value symbols are a purple jewel, a white rose, a piece of pearl jewellery, a gold swan and a blue vase; 9, 10, J, Q, K and A make up the lower values.

The Soul Queen herself is wild, she appears on reels three, four and five and she will substitute for all others to help form winning combinations except for the Soul Queen logo scatter symbol.

This is triggered by landing at least three of the Soul Queen logo scatter symbols anywhere in view and you’ll receive an initial eight free spins; before those spins start reels one, two, four and five will each spin once to determine which positions become ‘Soul’ symbols during this feature.

There’s an extra ‘Soul’ symbol during this round which will transform into matching standard symbols when it lands, along with the ‘Soul’ positions already revealed.

The wild symbol appears on on reel three during the spins but will award an increasing multiplier as the spins progress for an wins it helps out with.

It’s possible to trigger more spins with three more scatters and this time the Super Feature will trigger; reels one, two, four and five will spin once more to reveal an additional set of ‘Soul’ positions which should help out with bigger wins.

There’s a fair bit of variety involved in Soul Queen Quad Shot and this is probably one of our favourite slots from Ainsworth Gaming; it comes with some crisp graphics, an inventive free spins round, the Quad Shot jackpots and an RTP of 94.34%.