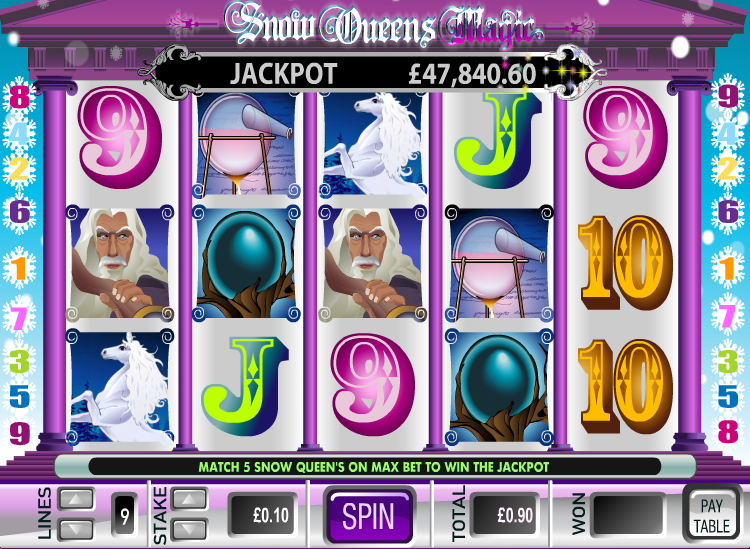 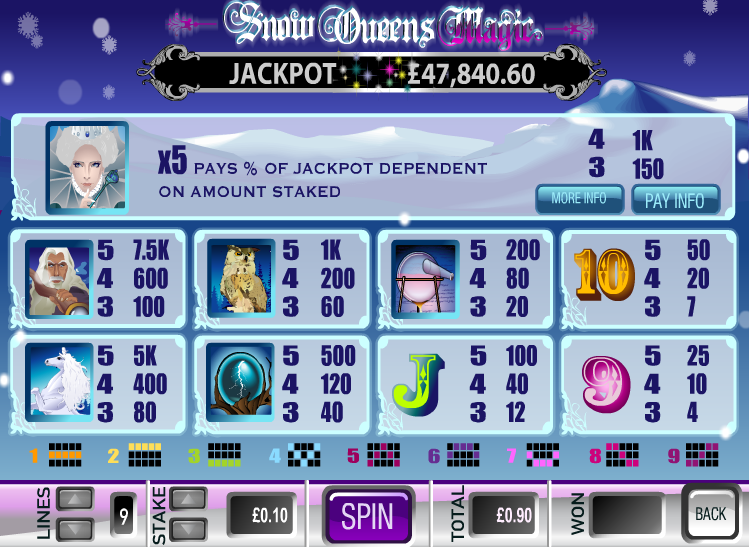 The Snow Queen is arguably one of Hans Christian Andersen’s less well-known stories; it comprises seven shorter stories and was written between 1805 and 1875. It tells the story of two friends, Gerda and Kai and the eternal struggle between good and evil. Snow Queen’s Magic brings this fight onto the reels in a game developed by Playtech/Virtue Fusion. There’s no bonus features but there is a progressive jackpot to aim for so read the full review below for more information.

Snow Queen’s Magic is a five reel slot with three rows and up to nine paylines; those reels spin against the backdrop of the purple-roofed Snow Queen’s palace. The paylines are nicely illustrated by snowflakes either side of the palace.

There are five high value symbols and these include the owl, some scientific equipment, the unicorn, a crystal ball and a white-bearded character we can’t quite place. 9, 10 and J represent the lower values.

The only special symbol is the Snow Queen and she’s the key to the progressive jackpot.

This is where the Snow Queen comes in handy and to win the big bucks you will need to land five of her on an active payline; you will then win a a proportion of the total jackpot amount depending on the size of your line stake.

Like similar games from Playtech/Virtue Fusion, there’s a scale which shows how much of the jackpot you can win with any given line stake:

Note that this isn’t your total stake but your line stake which means that for a £5.00 stake you could be in with a chance of winning millions – not too shabby.

Snow Queen’s Magic isn’t really much to write home about but if you like to play the jackpot games with no other feature distractions it’s probably worth a go; the RTP is a slightly low 93.00%.