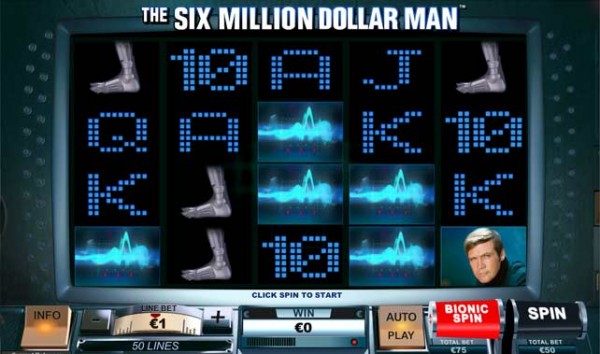 If you’re of a certain age then the Six Million Dollar Man should bring back some fond memories for you; it was  a TV show which ran over several seasons in the late 1970s featuring Lee Majors as Steve Austin, the former astronaut who needs a complete bionic rebuild after a terrible accident.  Of course his new parts give him all sorts of super strength and speed and a crime-fighting career ensues.

The Six Million Dollar Man online slot is of course an attempt to recreate the atmosphere and ambience of the cult TV show and it’s certainly a decent attempt.  There’s plenty of seventies-style lettering and design but combined with Playtech‘s excellent software it all makes for a great fruit machine.  There are even some original television clips incorporated into the game which you will experience when you get a winning line which includes wild symbol.

It’s a five reel slot with fifty paylines and punters familiar with the series will recognise the symbols; we have various bionic limbs and the director of Austin’s secret service employers, Oscar Goldman.  Steve Austin himself is the wild bonus symbol while the Six Million Dollar Man logo is the all important scatter symbol.

A nice option in this game is the addition of a Bionic Spin button alongside the normal button; going for a Bionic Spin will cost you a little bit more money but offers the chance of up to five of the symbols randomly changing into wild symbols.  This can be pretty lucrative for the brave punter.

There’s a hefty jackpot available for those who like to think of themselves as high rollers; 100 coins is the maximum wager but that can earn you an impressive 500,000 coins in prize money.  Beware the fifty paylines as that can eat up your deposit pretty quickly if you’re on an unlucky run.