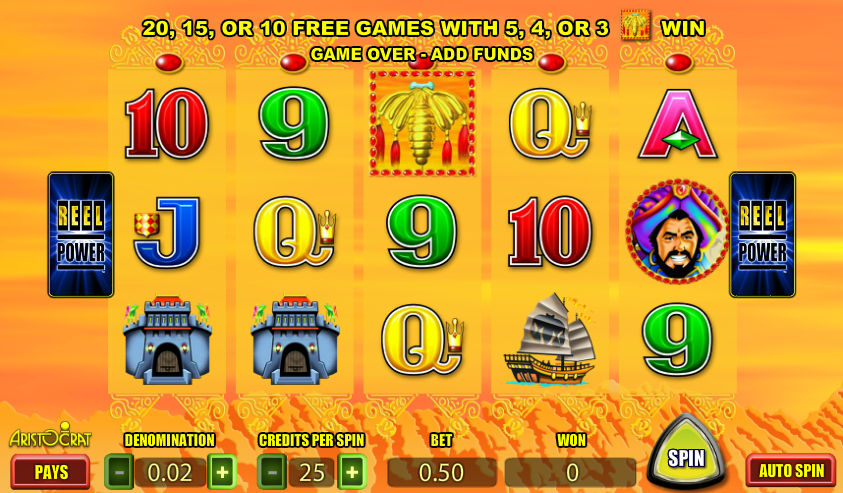 Online slots fans are of course an educated bunch and so will be well aware of the existence of the ancient Silk Road; in fact there were far more than just one and they were the vast overland and maritime trading routes which connected China to to Europe and India and facilitated trade in both directions for hundreds of years.  Silk Road is a slot by Aristocrat based on this legendary journey.

This game uses Aristocrat’s Reel Power payline structure which essentially does away with standard set up; there are 243 ways to win and all you need to do is get matching symbol in adjacent columns starting from the left hand side.

There’s a hot sandy background to the reels and while the low value symbols are 9, 10, J, Q, K and A, the main symbols are all theme-related.  We have a bottle of wine, a Chinese junk and the fortified gates of a trading post. A golden ornamental moth will trigger the bonus feature for you and there’s also a roll of silk which acts as the wild symbol.

This slot is slightly lacking in bonus features and only this free spins round will give you a break from the base game.  To access it you’ll have to land three, four or five of the golden moth scatter symbols anywhere on the reels which will entitle you to the following:

More free spins can be won from within this round.

All you can alter here is your stake so there’s no real advice as such to offer – just play the game and have fun!

This is a conversion from a land-based slot which doesn’t really capture the imagination; it’s rather basic and probably not worth much more than a glance unless you’re a fan of Aristocrat slots.