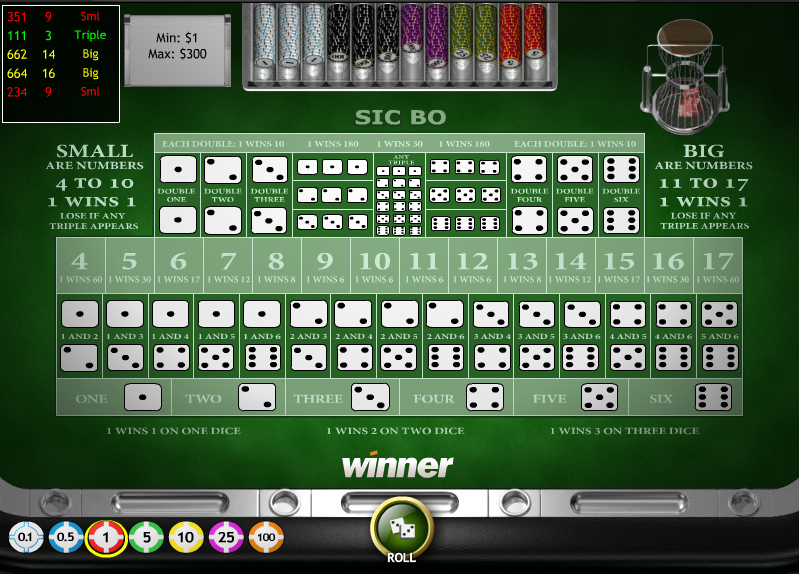 Sic Bo is a game played with dice which is Chinese in origin; although it is now commonly played in casinos in Europe and the United States it migrated from Asia via Chinese workers in the early 20th century. If you want to see Sic Bo played on a large scale a visit to Macau is probably in order.

Sic Bo is an outwardly simple game in which players predict the outcome of the roll of three dice and the online version we have here from Playtech is identical to the standard casino version in terms of betting options and odds.

How To Play Sic Bo

Load up the game and you will be presented with the screenshot above; at then top of the screen are the croupier’s chips along with the little cage containing the dice and a history of your recent throws. Underneath is the rather daunting table containing the betting options which we will explain below.

Three dice are always thrown but bets can be won with one or two dice correct also. We can break the betting options down as follows:

When you’ve got to grips with all the betting options just choose your chip size and place it on your chosen selection. Now click ‘Roll’ to get things underway.

This is a simple game and a decent enough conversion of this increasingly popular casino game. Beginners tend to fare best by betting on the big/small options but more experienced players can devise their own Sic Bo strategy to suit themselves.