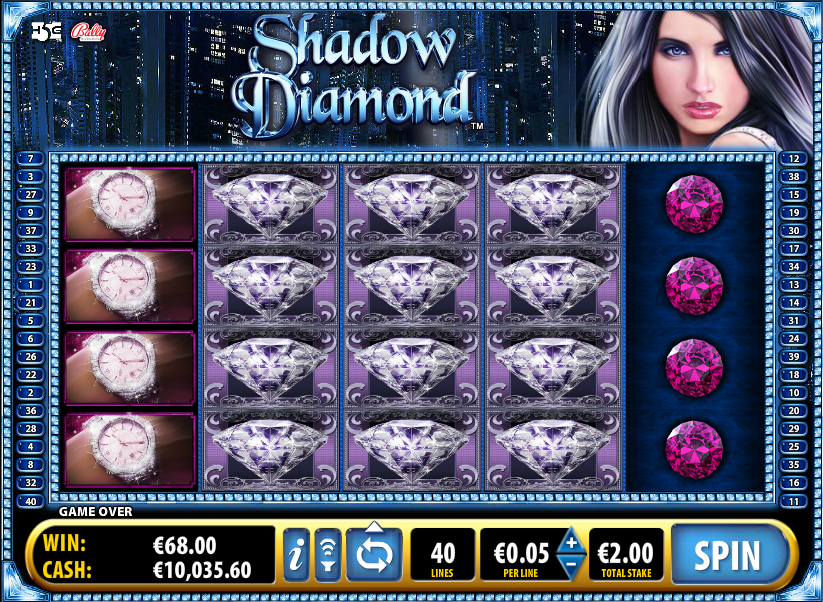 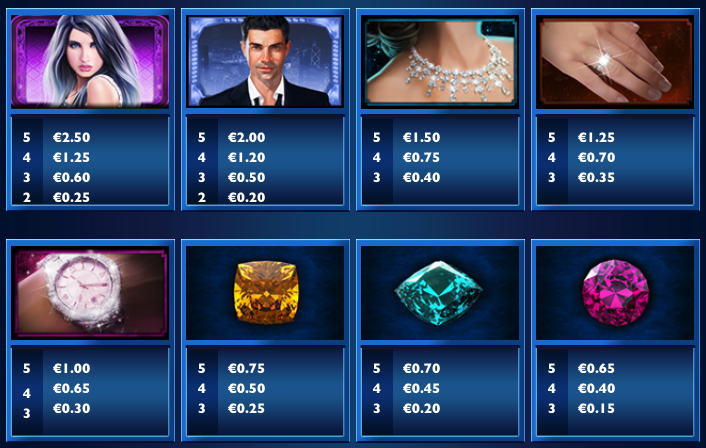 Shadow Diamond is one of those aspirational online slots which gives us a glimpse of what life could be like if we could hit the jackpot. It’s a jewel-encrusted extravaganza from Bally Technologies featuring a couple of city high-fliers in the process of getting engaged so read on to find out more about the stacked symbols and the bonus features.

Shadow Diamond plays out over five reels, four rows and forty fixed paylines; small jewels frame the reels which are set against a backdrop of skyscrapers at night. One of the characters in this story, a dark-haired girl, stares from above the reels, occasionally brandishing a gigantic diamond.

The symbols are all theme-related and include five gems – yellow, blue, pink, red and green, a posh watch, a diamond ring, a necklace and our male and female protagonists. The latter two will payout for just two on an active payline.

The Shadow Diamond logo is wild and then there’s a scatter symbol represented by a huge diamond which activates the main feature.

This is a slot based on stacked symbols which means that reels can be partially or completely filled with a single symbol. Big wins can be gained in this manner when several reels are filled with matching symbols.

Stacked symbols are also necessary to trigger the free spins and you will need reels two, three and four full of the big diamond scatters to kick this bonus off.

Before the spins start you will have be asked to select one of the five higher value symbols and this will be the main stacked icon during the seven free spins which now take place.

There’s no scatter symbols on show during the spins and so it’s not possible to re-trigger the feature from here.

Shadow Diamond is all very sparkly but it does seem to lack a bit of the imagination of other Bally slots. It’s playable enough though although the RTP is a little low at 94.00%.