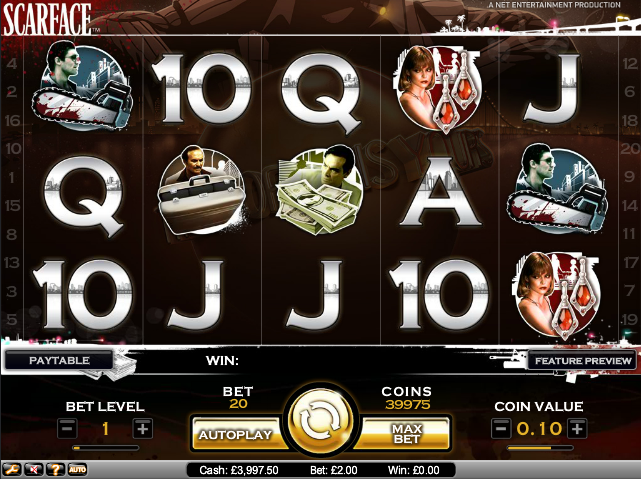 This online slot machine from Net Entertainment does an excellent job of bringing the atmosphere and big screen action all the way to the small screen.  Even the game’s intro is dramatic and worth watching at least once.  While the reels are spinning the words “the world is yours” on a golden globe fade in and out of the background.

Al Pacino and Michelle Pfeiffer are the backdrop to the game and if you look closely at the lower value playing card symbols you’ll notice a skyline in the background.  The special symbol are related to the theme and we have a briefcase, a pile of cash, a chainsaw, earrings and a Tony Montana logo.  All these symbols have a character associated with them.

There are loads of bonus games featured in this slot related to the stacked wild so we’ll run through each of them below – a stacked wild covers all the symbols on one reel:

Landing the stacked wild on reel two awards Nudge Spins; the nudge wild will; be nudged down while the remaining reels will get a free spin for a chance at a bigger win.

This is the fun one and you can check out the video below to see how it plays out; you’ll win it by landing the stacked wild on reel three and then you’ll get to play Tony’s Last Stand.

Tony stands at the top of the screen and has to fight off approaching gunmen; each spin of the reel will give him a range of shots which you then have to fire at the gunmen to slow their progress –  each gunmen is worth a coin prize.  You’ll die ultimately in a dramatic fall into a fountain but it’s all good fun.

This game is almost like a movie in itself; Net Entertainment don’t always include bonus games in their slots but they’ve wedged in a great one here. The soundtrack is dramatic and the reel animations whenever there’s a winning combo are worth seeing.