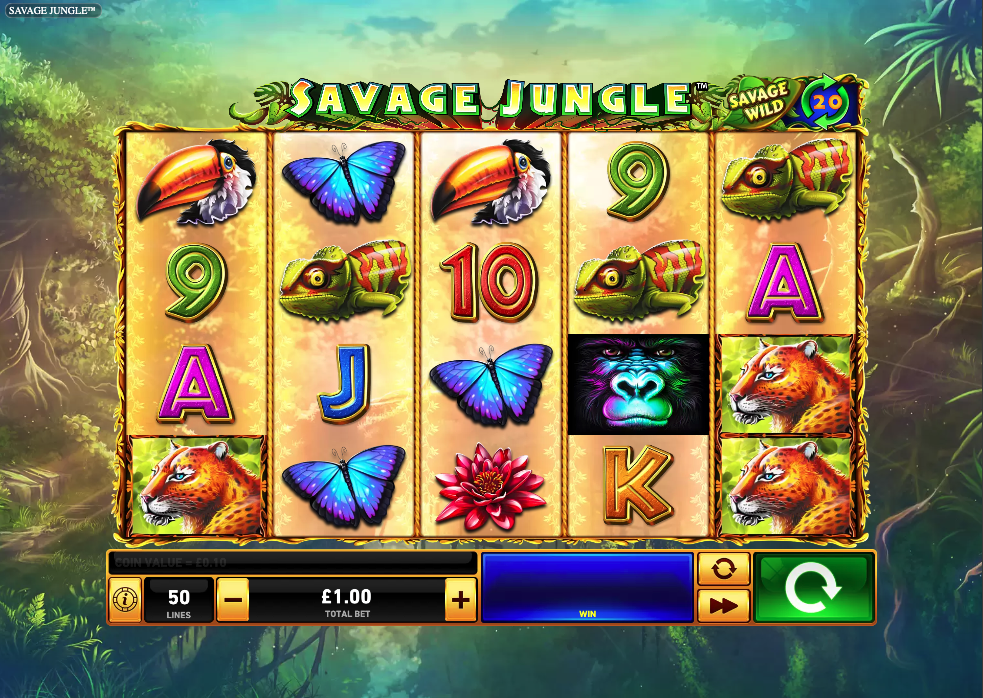 The sights, sounds and wildlife of some jungle location set the scene for this online slot from Playtech/Rarestone Gaming; it’s called Savage Jungle and it offers players the Savage Wild feature as well as plenty of jungly free spins.

Savage Jungle is a five reel slot with four rows and fifty fixed paylines; behind those reels there’s a steamy forest backdrop where thick, ancient trees wind themselves around each other.

The high value symbols include a leopard, a toucan, a chameleon, a butterfly and a pretty red flower; (, 10, J, Q, K and A make up the lower values. The gorilla is wild, he appears on reels two, three and four and he’ll substitute for all others to help form winning combos except for the diamond scatter symbol.

There’s a constantly running spin countdown timer in the base game which starts at anywhere between 10 and 50 (in increments of 5); each wild symbol which lands during this countdown will leave a leaf in that position showing a 1x multiplier value (a wild landing on a leaf will increment the multiplier by 1x).

When the countdown timer gets to 1 the next spin will turn all those leaf positions wild and any winning combos will be subject to the highest value multiplier on that payline. When all this is finished all leaves will be removed from the reels and the countdown will reset.

Landing at least three of the diamond scatter symbols anywhere in view will award an initial ten free spins but five more can be earned with another three scatters during this round. Any wild gorillas landing during this round will be locked in place until it ends – wilds landing on locked wilds will increment their multiplier by 1x.

We always like. new gameplay mechanic and we have one here with the Savage Wild countdown timer; it also raises the interesting question as to whether it’s better to have a longer or shorter timer in terms of cost per spin and the ultimate reward from this feature. Anyway enough yak, give it a try!