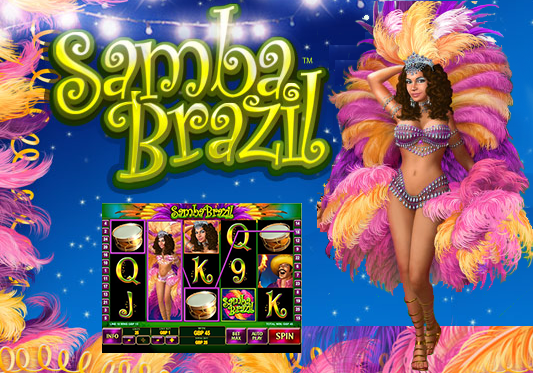 If you live in Northern Europe or North America or one of the numerous countries around the world which struggles to see the sun from one week to the next then the Samba Brazil online slot machine may be ideal for you. It’s a brand new release from the ever-reliable Playtech and hopefully it will infuse your gloomy winter evenings with some sun, sand, samba drums and sexy girls.

Samba Brazil is actually less about the beach and more about the famous Rio carnival.  This spectacular annual event is an opportunity for some 200 different samba schools to compete with each other in a stunning celebration of colour, samba music and skimpy outfits.

Back to the machine though and it’s a five reel, twenty five payline offering which aims to recreate the atmosphere of the carnival with attractive colours and catchy music.  As well as the standard symbols of 10, J, Q, K and A, there are samba drums, two types of dancing girls (garotas), fire-eaters, treasure chests, maracas and a Samba Brazil logo.  The Samba logo is the scatter symbol while the garotas are the wilds.

Following the recent fashion for expanding wild symbols, the garotas perform this function in Samba Brazil.  Reels 2 ,3 and 4 feature the wilds and if you spin one and make a winning combination, the symbol expands to cover the whole visible reel.  If you land more than one wild symbol you’re chances of winning bigger prizes increase yet again.

The scatter symbols are good value; if you spin two you’ll win randomly selected prizes or free spins, three or four scatters will win you the Samba music bonus which will reward you with free spins, multipliers and cash prizes.  Best of all, five scatter symbols wins you 100x multiplier.  The Samba music bonus transports you to a mini-game in which you must choose five of twelve maracas with each one winning you a prize of some sort.

We like Samba Brazil not just for it’s smooth gameplay and solid technological basis but for it’s attempt to inject some colour and fun into the online slot genre.  Don’t forget to turn the volume up!