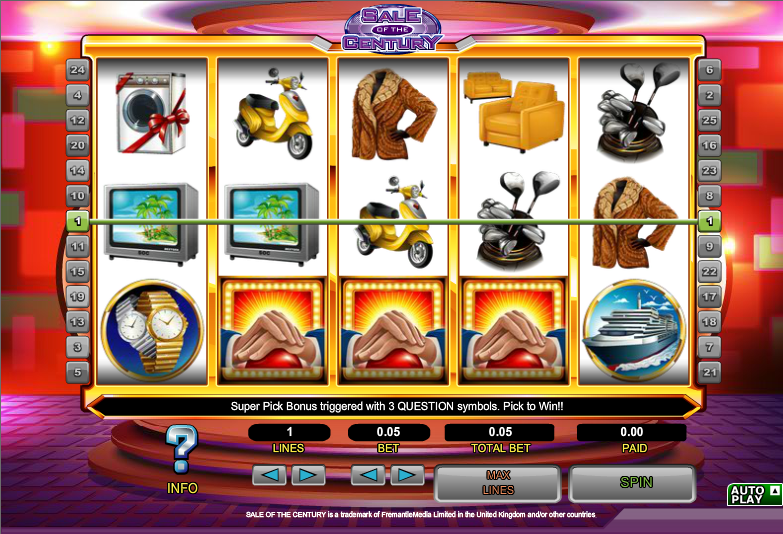 Hot on the heels of our review of the Blankety Blank slot it seems only appropriate to take a long look at another of the classic television game shows from the 1970s and 1980s.  Nicholas Parsons hosted this one and the idea was for contestants to build up a sum of money by answering questions to ultimately buy cheap goods.  Random Logic have once again grabbed the mantle and designed an online slot based on Sale of the Century.

Sale of the Century contains five reels and twenty five paylines and the reels are set in front of a seventies-style television studio.  Lots of buyable consumer goods make up the main symbols such as furniture, a washing machine, a TV, golf clubs, a scooter and jewellery. A luxury holiday and a car are the more valuable symbols.

The wild symbol is represented by hands pressing a buzzer and the Sale of the Century logo is the scatter.  There’s also an instant win symbol represented by a question mark.

This is a randomly awarded win during the base game only and you’ll be shown a prize which you can accept or reject for another one.  You can reject up to two prizes and you must accept the third one offered.

This is a handy little mini-game and to trigger it you need to land the question mark symbol on reels two, three and four.

All visible positions on those reels will change to question marks and you must pick one to reveal one of the following rewards:

If you win the free spins a random number will awarded with all prizes tripled.

This feature can be triggered either from the Super Pick game or by landing three or more scatter symbols anywhere on the reels.

You will now play eight Fast Money Spins on a three reel slot which has just the one centre payline.  We found it to be a good earner though because the idea is to collect the gift tokens which appear on the reels.  When the spins are complete you can swap them for items/cash in the gift shop.

Only the paylines are adjustable here but low rollers may fancy decreasing them to make your session last longer – all the scatter symbols will still be active of course. One more thing – with each Instant Win, the first amount was always the larger one, changing just decreased the win.

The graphics may be a little dated but there’s lots to like about this game – several bonus features and the show’s original soundtrack make it a fun experience.  All that’s missing is the voiceover saying “…and now, from Norwich, it’s the quiz of the week!”