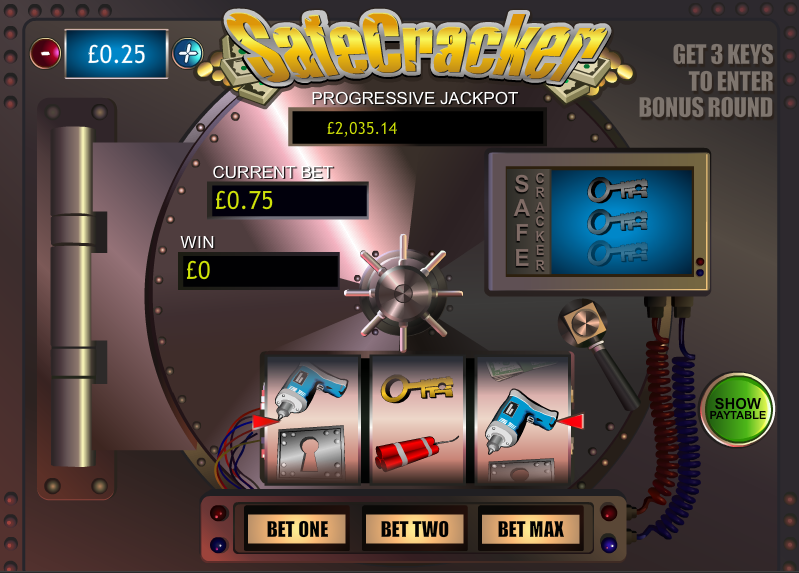 If you get the feeling that you may never ever get the chance to break into a bricks and mortar bank vault then you should take some comfort in the knowledge that there are a handful of online slots (try Bust-A-Vault & Vault Assault) which will allow you to do the same thing with no risk of taking part in any illegal activity. This one’s called Safecraker and it’s by Playtech.

Safecracker is a three reel slot with one single payline and it also features a progressive jackpot, the total of which scrolls across the top of the screen. The backdrop is one huge metal safe and the reels actually take up quite a small portion of the available room.

The main symbols are all related to the theme and include banknotes, gold keys, a lock, a crowbar, a drill and some explosives – several being vital to a successful safe break.

The gold key is also the bonus  symbol which triggers the main feature.

One or two of the banknotes will win you a payout of 3x and 25x your bet respectively.

If you can manage to land three of those gold keys on the payline you will trigger this mini-game. You will be taken to a screen displaying ten deposit boxes, seven of which contain prizes and three of which are alarmed. You must pick boxes and collect prizes until you find one with an alarm at which point the round is over.

To win the progressive jackpot in safecracker you must firstly be betting at the maximum three coin value. Then you must land three of the banknotes on the payline, after which the big money will yours.

If you’re after the big jackpot, make sure you’re playing with all three coins; it would be unfortunate if you landed all three banknotes without three coins.

This is a playable enough slot with a bonus feature and a nice jackpot. Perhaps the feature could have been a bit more imaginative but it is what it is.