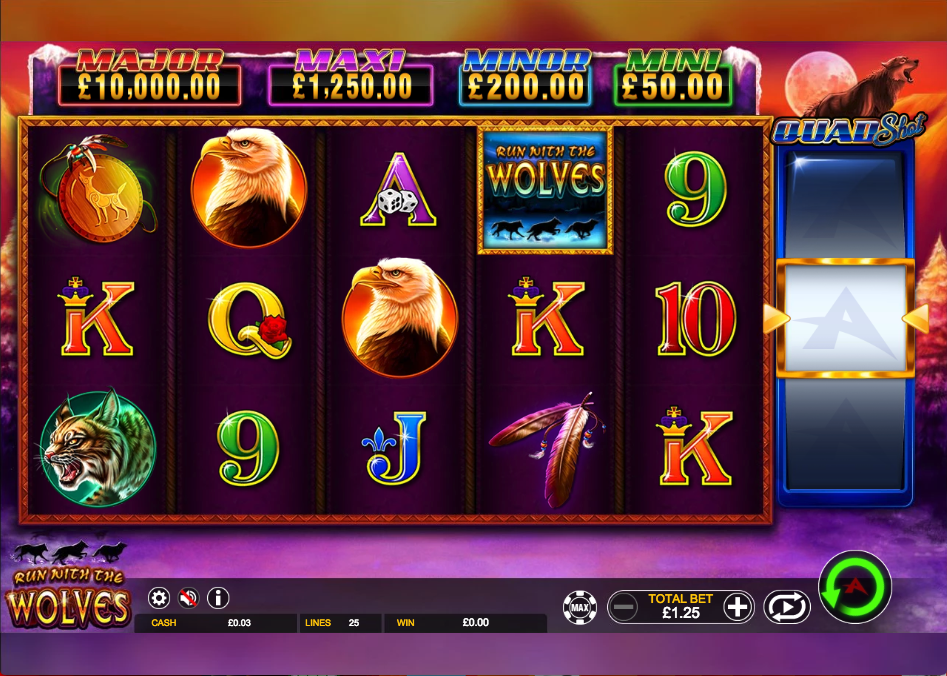 Getting away from civilisation from a little while is something which would probably benefit most of us and perhaps we can experience a little bit of that vicariously by playing this online slot from Ainsworth Gaming; it’s called Run With The Wolves and it’s part of Ainsworth’s collection of Quad Shot games – find out how works below.

Run With The Wolves Quad Shot is a five reel slot with three rows and twenty five fixed paylines; the setting sun illuminates the backdrop to those reels while a wolf howls in front of a full moon in the top right hand corner.

The higher value symbols include the bear, a puma, an eagle, some feathers and a disc displaying a wolf; 9, 10, J, Q, K and A make up the lower values.

The wolf is appropriately wild, it appears only on reels three, four and five and it will substitute for all others to help form winning combinations except for the game’s logo scatter symbol.

This is triggered by landing at least three of the game’s logo scatter symbols anywhere in view; you’ll now get to choose from one of the following options:

The choice is yours and when the spins are underway the wild wolf appears only on reels two, three and four; three more scatters will award five extra free spins.

If you’ve played one Ainsworth slot then you know what you’re getting with Run With The Wolves – it does what it says on the tin but there are better games around. Still, the Quad Shot is a nice touch so why not try it, it comes with an RTP of 94.41%.