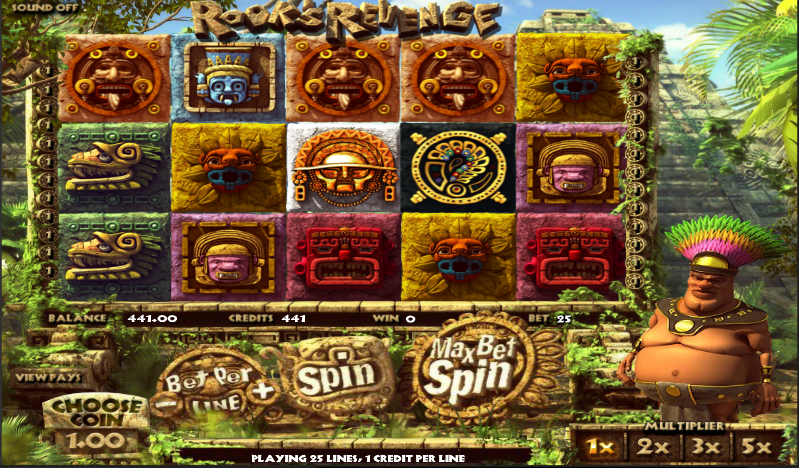 The jungles of South America are once again our destination as we check out this Mayan-themed online slot. It’s called Rook’s Revenge and it’s developed by Betsoft, a company with a huge backlog of games, most of which we are yet to try out. Rook’s Revenge looks fantastic and it may be just us but it reminds us of Gonzo’s Quest from Net Entertainment.

Rook’s Revenge plays out over five reels and twenty five fixed paylines and although this is a theme we’ve seen before, the quality of the implementation is as good as anything we’ve seen. A fat chieftain lurks to the right of the reels and in the background there’s a temple, overrun by encroaching undergrowth.

There are seven basic symbols and they are all representations of gods carved into stone; you can tell them apart by design and by colour.

The golden mask is the bonus symbol which activates the main feature and the wild is a big, gold, jewel encrusted question mark which substitutes for all other symbols.

This is a feature we always like in games and it works like this – every time you land a win, the symbols involved in that win will explode, causing more to drop down to fill the spaces. Another win with these news symbols will cause the same outcome.

With every subsequent explosion, the multiplier for the win will increase by 1x up to a maximum of 5x.

The golden mask symbol only appears on reels one, two and three and if you can land them on a winning payline you will trigger this feature.

You will receive a generous twenty free spins which start automatically and the exploding symbols multiplier becomes more valuable here -the second, third, fourth and fifth wins will earn 3x, 6x, 9x and 15x respectively so it’s a pretty profitable round.

The fixed paylines mean we have nothing useful to add here but we think it’s worth keeping the sound turned on for the high quality sound effects.

This is a top notch game which looks fantastic and sounds great too; it’s like Gonzo’s Quest with some added extras and really should not be missed. An Autoplay button would be nice though.