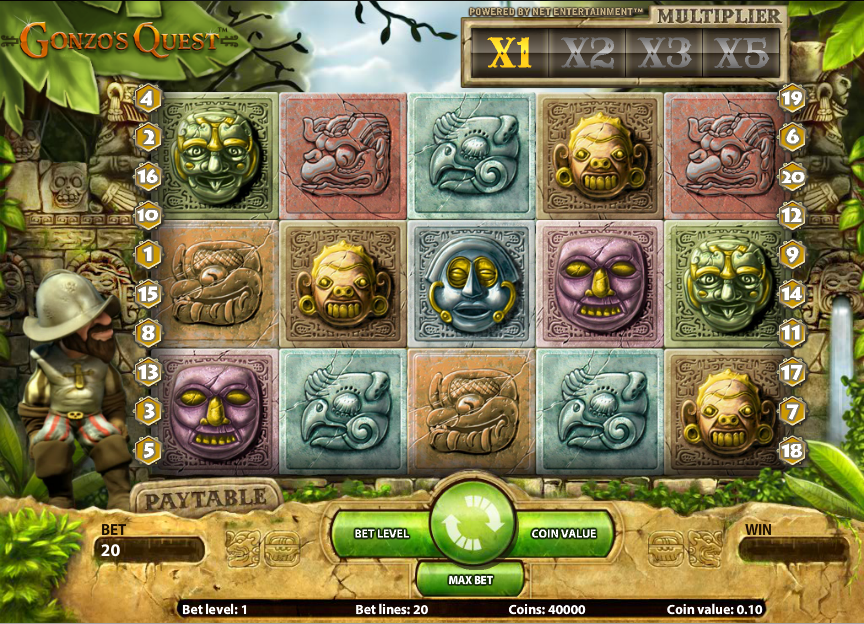 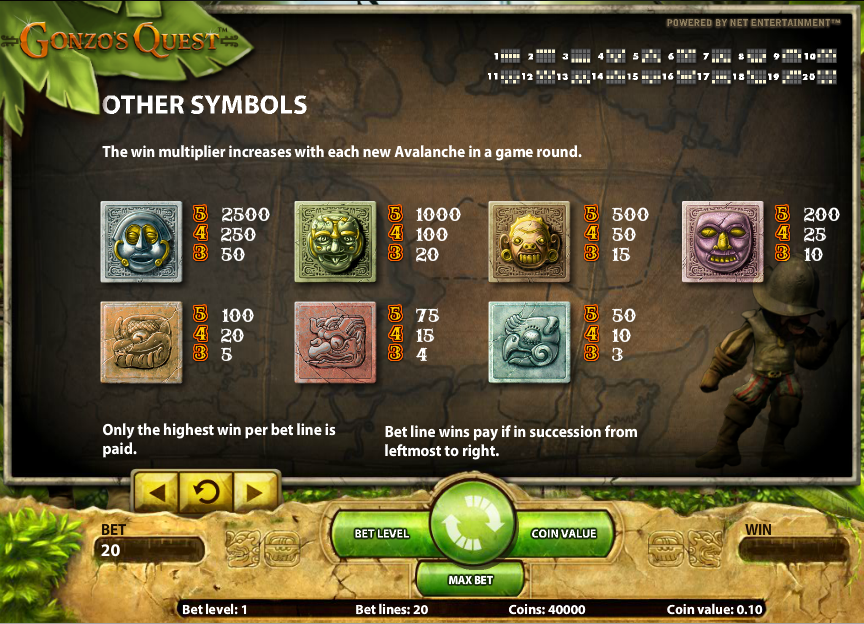 Gonzo’s Quest – The Search For Eldorado is one of the more recent online slots from Net Entertainment and it tells the tale of our hero, Gonzo, and his search for the legendary city of Eldorado.  History buffs will be well aware that Eldorado (or El Dorado) is the fictional South American city that nevertheless became the target for a number of explorers from the 16th century onwards.

Back to Gonzo though and this slot is a five reel, twenty payline machine that looks great on every level. The opening sequence should definitely be watched once the first time you play it and the background to the game is a scene of jungle and golden Aztec pyramids.  Gonzo himself loiters to the left of the reels occasionally breaking out into a dance when you spin a win.

The symbols are all intricate block carvings reminiscent of ancient South American cultures and the best way to describe them is by colour; from lowest to highest value they are coloured light blue, red, orange, purple, brown, green and blue.  All the carvings differ but they’re a bit hard to describe.  The two special symbols are a gold ‘Free Fall’ block and a wild symbol with a question mark on it.

The biggest draw for Gonzo is the way the blocks in a winning combination crumble and are replaced by new blocks, with everything else falling into place.  This obviously means you have another chance of winning; the first win gets a 1x multiplier, the second gets a 2x multiplier and so on until the maximum of 5x is reached.

The one bonus game is the Free Fall feature; this is triggered by landing three of the Free Fall symbols on a single payline and essentially you’ll get 10 re-spins; the multiplier is increased from the main game to 3x, 6x, 9x and 15x and more free spins can be won during this feature.

You can wager from €0.20 to €50.00 on the 20 fixed paylines and Gonzo is a real gem from Net Entertainment which is clearly worth a few minutes of your time.