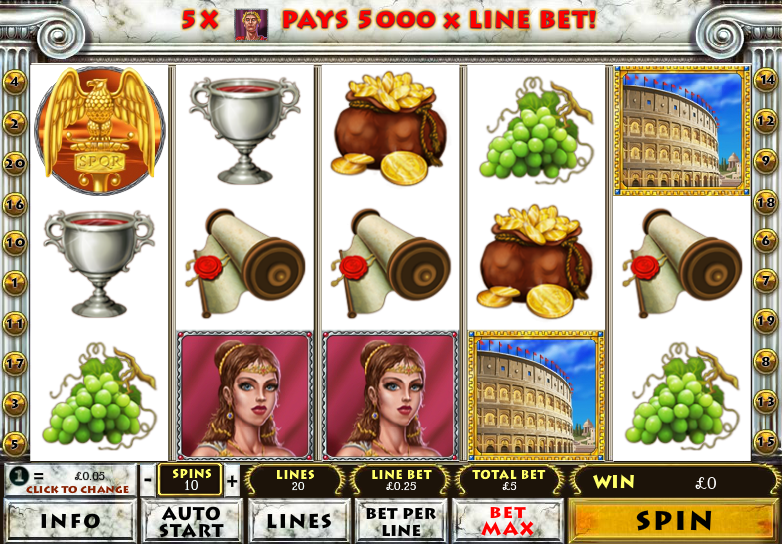 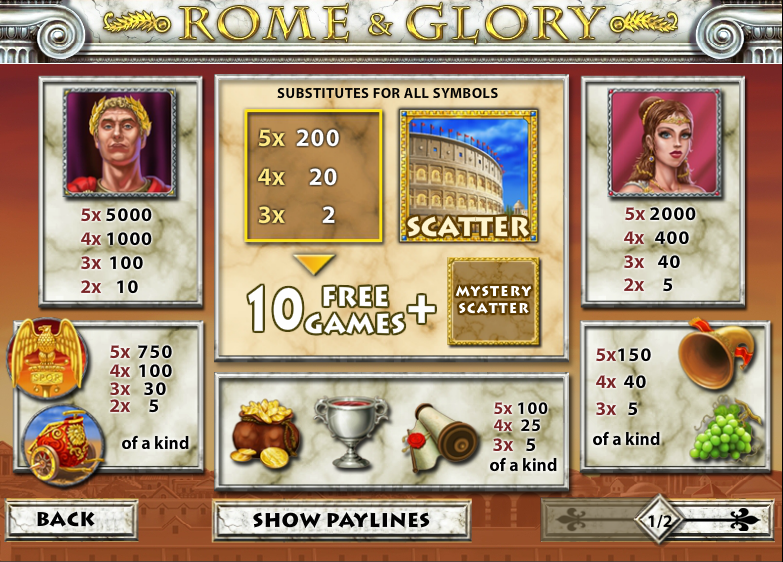 Ancient Rome has been the setting for more than a few online slots but it was a pretty successful civilisation while it lasted and no doubt it can carry a few more before the ideas dry up. Rome & Glory is a Playtech release and it features plenty of imagery that will be familiar to veteran players but it also has a reasonably individual look and feel which means it shouldn’t be ignored – read the full review below for all the essential details.

Rome & Glory is a five reel slot with three rows and twenty fixed paylines; two ornate columns frame the reels and there’s a glimpse of polished marble below the title at the top of the screen. There’s a laid back soundtrack to accompany your gameplay.

All the symbols are related to the theme and include Caesar, his wife, the SPQR banner, a chariot, a bag of gold, a cup of wine, a scroll, a musical horn and a bunch of grapes.

Unusually the wild and the scatter is the same symbol – it’s a view of the Colosseum before it fell into disrepair and it also activates the main feature.

This bonus round is triggered by landing three or more of the Colosseum scatter symbols anywhere in view and for this will receive ten free spins.

While the spins are underway another symbol will be chosen to act as an extra scatter, increasing the chances of landing scatter wins and re-triggering more free spins. More spins can be won indefinitely. When the spins have finished you will be returned to the base game.

Rome & Glory is not a bad slot but it’s not the best we’ve played on this particular theme (and we’ve reviewed a lot). However if you like this genre then you’ll probably appreciate this game which comes with a slightly low RTP of 94.36%.