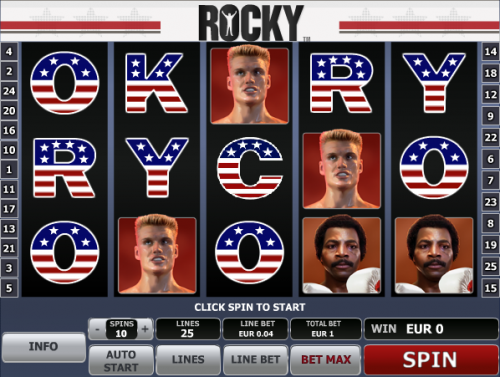 Rocky Balboa is arguably one of the most memorable screen characters of the last few decades; Sylvester Stallone first played the Philadelphia boxer way back in 1976 and the series continued with five more films ending with Rocky Balboa in 2006.  Playtech has taken on the job of transferring Rocky to the online slot arena with this game and it’s a really well-conceived game.

There are five reels and twenty five paylines and the music seems to be straight from one of the Rocky movies and the basic symbols are the letters R, O, C, K and Y decorated with the Stars and Stripes.  The highlights are the higher value symbols though which display a range of characters from the Rocky series including Paulie, Ivan Drago, Adrian, Clubber Lang, Apollo Creed and Rocky himself.

Rocky is the wild symbol while the Italian Stallion logo is the scatter; red and white boxing gloves are the bonus symbols.

However, you don’t win every round and you’ll only win cash prizes on those you do.  Rocky sometimes knocks out his opponent and if he does all un-fought rounds and the prizes are awarded to you.

Landing three, four or five of the Italian Stallion scatter symbols anywhere on the reels will win you 15, 20 or 25 free spins respectively.  That’s a good start but you’ll also get a 2x multiplier on every prize you win and it should be noted that’s it’s also possible to win more free spins indefinitely by landing more scatters.

This is really crisp, clean slot and Playtech have done an excellent job of bringing the Rocky franchise to the computer screen.  The music sets the scene right from the start and the variety of bonus games means this is a game you’ll want to keep returning to.